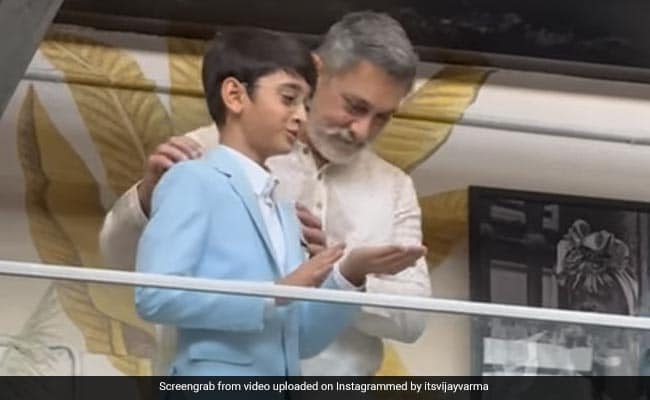 Aamir Khan danced to his iconic song Papa Kehte Hain from his 1988 film Qayamat Se Qayamat Tak at daughter Ira Khan’s engagement party. What made his performance so special, you ask? Well Aamir danced with his son Azad and filmmaker cousin Mansoor Khan (who directed the 1988 film starring Aamir in the lead role). Actor Vijay Varma, who was one of the attendees at Ira Khan and Nupur Shikhare’s engagement party, shared fun-filled video along with pictures from the celebrations on his Instagram profile on Wednesday. Other that the candid pictures of the engaged couple, the album also had photos of guests Fatima Sana Shaikh, Vijay Varma and Gulshan Devaiah.

Swipe to see the video of Aamir Khan and son Azad dancing:

Earlier, a video of Aamir Khan and Mansoor Khan dancing at the party went insanely viral on social media. In the video, Aamir Khan can be seen grooving to his evergreen track Papa Kehte Hain from his 1988 film Qayamat Se Qayamat Tak.

This is video we are talking about:

Ira, younger of Aamir Khan’s two children with his first wife Reena Dutta, got engaged to celeb fitness trainer Nupur Shikhare in September. The couple hosted a party with friends and family in November.

Aamir Khan, who was married to filmmaker Kiran Rao for 15 years, announced divorce in July last year. They continue to co-parent son Azad.

Ira made her directorial debut with a theatrical adaptation of Euripides’ Medea, which featured Hazel Keech in the titular role. It premiered in different cities across India in December 2019. Ira has studied music, while her brother Junaid often assists father Aamir Khan in filmmaking.

Shilpa Shetty Pictured At Launch Of Her New Restaurant With Kids Viaan, Samisha