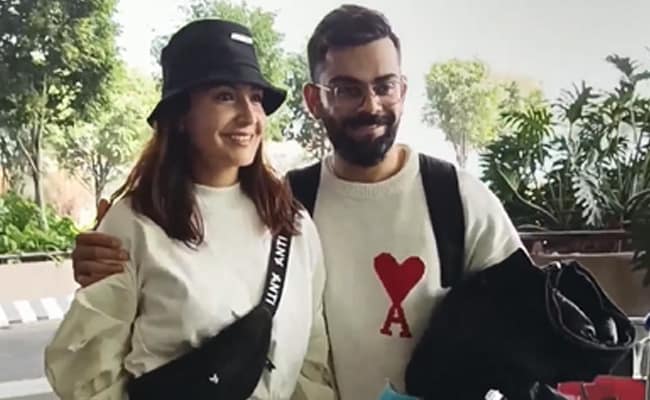 Anushka Sharma and Virat Kohli pictured at the Mumbai airport.

Anushka Sharma and husband Virat Kohli were clicked at the Mumbai airport on Wednesday afternoon. The star couple were twinning and winning. Both Anushka and Virat were dressed in matching white t-shirts and black pants. The couple were all smiles as they made their way into the Mumbai airport, walking hand-in-hand. After posing for the paparazzi, Virat Kohli, thanked them saying, “Thank you so much. Thanks for understanding haan.” The star couple have constantly emphasized on the need for privacy for their daughter Vamika and last year, they had appealed to the paparazzi to refrain from taking pictures of their daughter.

Anushka Sharma married cricketer Virat Kohli in 2017 in an intimate ceremony in Italy after dating for many years. They welcomed daughter Vamika in January last year.

The actress, who was last seen in the 2018 film Zero, co-starring Shah Rukh Khan and Katrina Kaif, was busy as a producer in the last few years. Anushka Sharma is the star of films like Rab Ne Bana Di Jodi, PK, Band Baaja Baaraat, Sultan and Ae Dil Hai Mushki, to name a few. Anushka Sharma will next be seen in Chakda Xpress.

Anushka Sharma will next be seen in Chakda Xpress, her first project after the birth of daughter Vamika, who she welcomed in 2021. The film is based on the life of Jhulan Goswami. The actress shot for parts of the film in Kolkata and the UK. The film went on floors earlier this year.