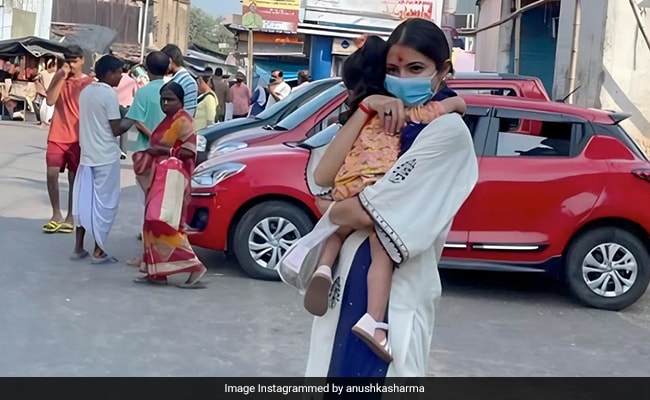 Anushka Sharma, on Saturday afternoon, shared pictures from her Kolkata diaries. The actress was there for the shooting of her next project Chakda Xpress, her first project after the birth of daughter Vamika, who she welcomed in 2021. The film is based on the life of cricketer Jhulan Goswami. Anushka Sharma shared a couple of pictures of all the food she had in Kolkata, the places she visited. However, our favourite has to be the photo of her with daughter Vamika. “Eat-Pray-Love: My Kolkata photo dump,” Anushka Sharma captioned the post. She added the hashtags #ScheduleWrap #ChakdaXpress and #Kolkata to post.

Anushka Sharma married cricketer Virat Kohli in 2017 in an intimate ceremony in Italy after dating for many years. They welcomed daughter Vamika in January last year. Earlier this month, she shared a video from her playdate with Vamika and wrote: “I was on a play date with my little girl and I was clearly doing most of the playing.”

The actress has also been sharing posts from Chakda Xpress shoot. “Getting into her shoes and recreating the journey,” she captioned this one.

“A moment from a story that needs to be told,” she captioned this post from her Chakda Xpress diaries.

The actress, who was last seen in the 2018 film Zero, co-starring Shah Rukh Khan and Katrina Kaif, was busy as a producer in the last few years. Anushka Sharma is the star of films like Rab Ne Bana Di Jodi, PK, Band Baaja Baaraat, Sultan and Ae Dil Hai Mushkil, to name a few. Anushka Sharma will next be seen in Chakda Xpress.