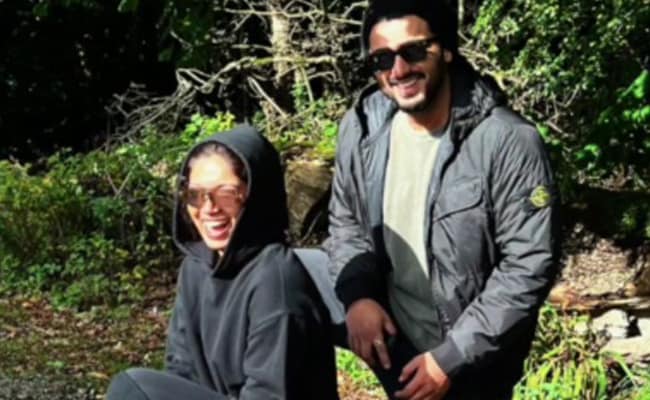 A still from the video. (courtesy: arjunkapoor)

Don’t ask about Bhumi Pednekar and Arjun Kapoor‘s whereabouts. The duo are busy going “dumb and dumber” in Glasgow, where they have been shooting for their film The Lady Killer. The two are goofing around on the streets of Glasgow and it is super funny. But it is also giving Arjun’s cousin Rhea Kapoor “production anxiety” (we will explain that later). In the video, Arjun Kapoor is seen “trolling” Bhumi Pednekar. “Bhumi, how’s the weather?” he asks the actress, who is adjusting her cropped black hoodie and jeggings to cover her ears and belly. “It’s very cold ya,” she replies, only to give Arjun Kapoor a chance to poke fun at her. He says, “Toh crop top mein aya karo aur abs dikhane.” Sharing the video titled, “When Arjun And Bhumi Walk War,” the stars took inspiration from Jim Carrey and Jeff Daniels’s comedy film series and wrote, “Dumb and Dumber do Glasgow.”

The post instantly became a hit among Bhumi Pednekar and Arjun Kapoor’s friends and colleagues. Well, the award for the best comment goes to producer Rhea Kapoor. Reacting to the clip, she wrote, “This gives me production anxiety.” To this, Bhumi replied, “Bro where, such sweet simple people living the simple life.” Too good, Bhumi.

Bhumi Pednekar, in her defense, dropped a separate comment, “Always trolling me, Arjun Kapoor.” Her sister Samiksha Pednekar loved the video and was all hearts for it.

Arjun Kapoor’s sister Anshula wrote “cuties” under the post. Actress Priyanka Bose called Arjun and Bhumi Pednekar “nutcases” in the comments section, and the Badhaai Do actress agreed, “Little for sure.”

Arjun Kapoor and Bhumi Pednekar’s The Lady Killer was announced in October, last year. The film is directed by Ajay Bahl.

Arjun Kapoor and Bhumi Pednekar started shooting for The Lady Killer in April. Here’s what they shared from the set.

Arjun Kapoor was last seen in Ek Villain Returns. Apart from The Lady Killer, Arjun has Kuttey in the kitty. Meanwhile, Bhumi Pednekar will be seen in Govinda Naam Mera and Bheed.