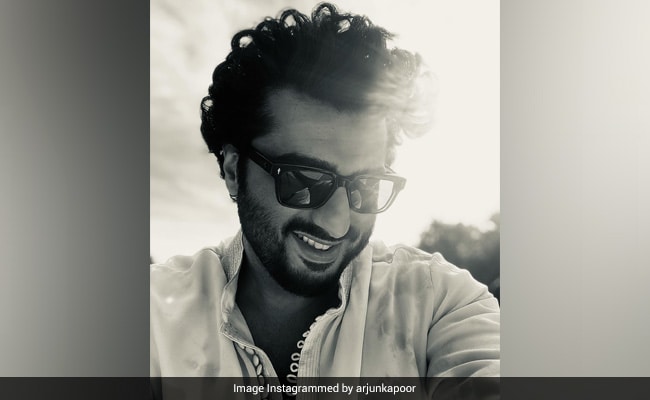 Arjun Kapoor, who is currently in Glasgow, United Kingdom, for the filming of his next film, has shared dashing pictures. On Instagram, he shared sunkissed monochrome photos and captioned it as “Nai Film Nai Vibe #fromglasgowwithlove”. However, what grabbed our attention was the Instagram exchange between Arjun and Varun Dhawan with a pinch of Koffee. Soon after Arjun shared the post, Varun commented, “Kya insaan ho aap“. To this, the actor replied,  “tumhare koffee peete peete meri diye gaye description ke bilkul opposite insan hoon main…”

ICYMI, in the recent episode of Koffee With Karan, Varun Dhawan appeared with Anil Kapoor on the show. During a rapid-fire session, Arjun Kapoor was name-checked in almost all the answers by Varun.

During a recent episode of Koffee With Karan, when Karan Johar asked Varun Dhawan who “brags the most,” Varun took Arjun Kapoor’s name. When asked who is most likely to gossip and flirt, Varun again Arjun’s name and said: “Shaukeen aadmi hai.” He added, “Arjun karta hai flirt kabhi kabhi (Arjun flirts occasionally).” When KJo asked: “Really? Is he sliding into people’s DMs?” Varun replied, “Once in a while, it’s all fine.”

Later, Anil Kapoor, who is Arjun Kapoor’s uncle, joked, “Uska breakup ho jayega (He might have a breakup now).” To this, Varun replied, “Nahi nahi, woh nahi hoga(No, that won’t happen).” Arjun Kapoor and Malaika Arora have been dating for a while now.

Meanwhile, on the work front, Arjun Kapoor will be next seen in The Lady Killer and Kuttey.