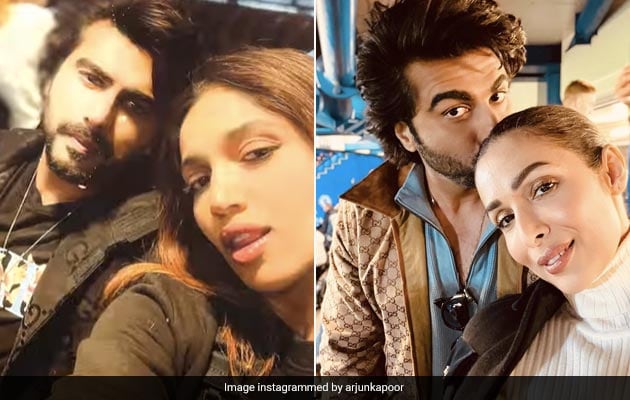 A still from the video. (courtesy: arjunkapoor)

Arjun Kapoor was busy shooting for his upcoming project alongside Bhumi Pednekar and Rakul Preet Singh in Scotland and London. The trio were reportedly filming for ​​Meri Patni Ka Remake. Now, Arjun Kapoor has shared a montage summing up his 45-day work trip. From his time at the gym to shooting diaries to spending time with his ladylove Malaika Arora, Arjun Kapoor’s latest update is all things amazing. We also get a  glimpse of Rakul Preet Singh’s birthday celebration. Oh, and, don’t miss the yummy food slides. Arjun Kapoor, for the background music, picked AP Dhillon’s Summer High. His caption read, “A reminder of the 45 days that went by… Because all work and no play make Arjun a dull boy. Only good vibes in Scotland and London with my people.” Malaika Arora was among the first to drop a comment under the post. She shared a red heart emoji. Rakul Preet Singh followed suit. Singer Lisa Mishra wrote, “Gosh you cuties,” and tagged Malaika. AP Dhillon reacted to the post with fingers crossed emoji. To this, Arjun Kapoor replied with a fire emoticon.

Before this, Arjun Kapoor shared a happy picture of himself in a casual outfit leaning on a car with Christmas decor. For the caption, he wrote, “That moment when you eat at your friend’s new restaurant and you feel proud, happy and satiated.” Arjun Kapoor’s post soon caught the attention of Bhumi Pednekar. Reacting to this, Bhumi wrote, “The photographer is top btw [ by the way] Arjun Kapoor” with a rocket emoji. To which, Arjun Kapoor replied, “Bhumi Pednekar, yeah, I made sure the photographer was well fed so she shoots me well” with laughing emojis.”

On Rakul Preet Singh’s birthday, Arjun Kapoor shared a picture featuring the birthday girl, Malaika Arora, Bhumi Pednekar,  and others from the team.

Malaika Arora visited Arjun Kapoor in London and the couple had a blast, to say the least. The two also went to watch a Chelsea game. Along with the series of pictures and videos from the football game, the actor wrote, “Ticked off the bucket list thanks to everyone at Chelsea FC… being able to take her to a Chelsea game at the [Stamford] Bridge. We won 3-0 and I had someone next to me to celebrate it with !!! (swipe right)”.

Arjun Kapoor and Bhumi Pednekar also have The Lady Killer in the pipeline. The actor was last seen in Ek Villain Returns.