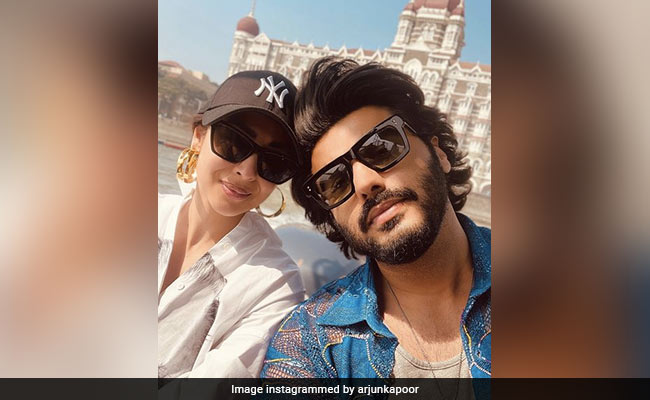 Arjun Kapoor recently took his girlfriend Malaika Arora on a day out in Mumbai. The actor shared a picture of himself with his girlfriend and also gave a shout out to her for her upcoming show, Moving In With Malaika. Arjun Kapoor, who won’t be around for Malaika’s shoot due to his work commitments, not only took her out to compensate for it but also wrote the sweetest caption for her. Sharing a selfie on his Instagram handle on Friday, Arjun Kapoor wrote, “Baby’s day out. Her show starts soon and my next outdoor starts sooner, won’t be around to be there for her shoot but I think she’s gonna ace this new journey.”

Arjun Kapoor’s gesture soon caught the attention of his girlfriend, who in the comment section wrote, “Awww baby.”

Many others too reacted to Arjun’s sweet post. Arjun’s aunt and Fabulous Lives Of Bollywood Wives star Maheep Kapoor dropped many hearts on his post. Maheep’s co-star Seema Sajdeh too reacted to the post and dropped hearts in its comments section. Meanwhile, Masaba Gupta dropped an evil eyed emoji and a heart emoji on the actor’s post.

Check out a picture from Arjun Kapoor’s day out with his “baby” Malaika Arora:

Malaika Arora will be soon seen in Disney Plus Hotstar’s Moving In With Malaika. The show is going to be a reality series about her life.

Check out Malaika Arora’s show announcement post and its teaser:

Malaika and Arjun have been dating for a while now and often share pictures of each other on their respective social media handles.

Check out a few of their pictures here:

On the work front, while Malaika will be busy with her reality series, Arjun Kapoor will be seen in the film The Ladykiller, co-starring Bhumi Pednekar. Other than The Ladykiller, Arjun and Bhumi are shooting for another film, details of which are currently under wraps.

Can You Look As Stylish As Arjun Kapoor And Sanjay Dutt?