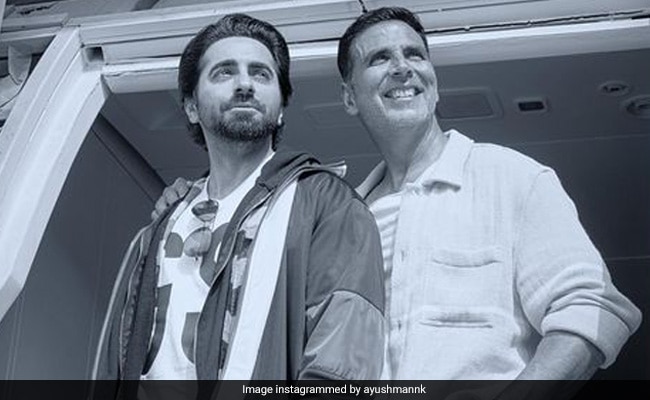 Ayushmann Khurrana’s film An Action Hero released this Friday. The actor has now shared a special Instagram post dedicated to Akshay Kumar. Reason? Akshay made a cameo in the film. Expressing his gratitude, Ayushmann posted a wonderful picture with the “OG Khiladi”, and thanked him for being a part of An Action Hero. In the black and white frame, the two can be seen looking away from the camera. For the caption, Ayushmann wrote, “Flying high on the reviews and because the OG Khiladi is in the house (or rather plane) Thank you Akshay Kumar sir for being a part of our film. We will always be grateful,” with a range of emojis. Ayushmann Khurrana’s wife Tahira Kashyap reacted to the post with a red heart and a fire emoji.

Ayushmann Khurrana was busy with the promotion of An Action Hero for the past couple of weeks. He visited the sets of Jhalak Dikhhla Jaa 10, a dance reality show that features actress Madhuri Dixit as a judge. Ayushmann was seen shaking a leg with Madhuri Dixit. The two shared a video on Instagram grooving to the remixed version of the hit number Aap Jaisa Koi that features in An Action Hero. Ayushmann wrote, “Aap Jaisa Koi…hai hi nahi Madhuri Dixit ma’am (There is no one like you). #AnActionHero in cinemas this Friday.”

Now, look at the trailer of the film – An Action Hero, shared by Ayushmann Khurrana.

When Ayushmann Khurrana shared his first look from An Action Hero, his fans couldn’t help but feel all excited and thrilled. As seen in the poster, Ayushmann is holding a gun, looking fierce and ready for a fight. Ayushmann stated, “Phata poster aur nikla ACTION HERO! Ladne ki acting toh kar li, kya asliyat mein lad paaunga (Have done the acting of fighting but will I be able to fight in real life?)” He also added, “Trailer out on November 11, 2022. An Action Hero coming to cinemas on December 2, 2022.”

This year, Ayushmann Khurrana also appeared in films such as Anek and Doctor G. After An Action Hero, he will be next seen in Dream Girl 2, opposite Ananya Panday.

Akshay Kumar was last seen in Ram Setu alongside Jacqueline Fernandez, Nushrratt Bharuccha and Satya Dev in crucial roles. He will next feature in Selfiee, OMG 2 and the Hindi remake of Soorarai Pottru.