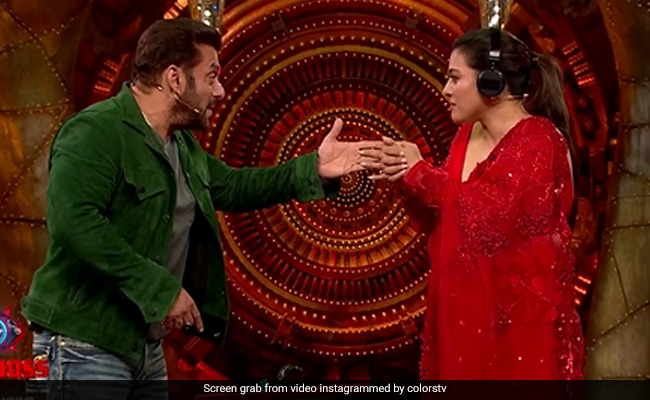 Salman and Kajol in a still from the video. (courtesy: colorstv)

Kajol is super busy with the promotional campaign for her upcoming film Salaam Venky. From attending events to reality shows, the actress has ticked all the boxes. Latest stop: Salman Khan’s Bigg Boss. The makers have shared a video of  Kajol and Salman Khan having a blast on the sets of the show. Kajol looks stunning in a red saree. Be it re-creating the eye-to-eye scene from their film Pyaar Kiya To Darna Kya or playing a game, the clip is too good to miss. The text attached to it read, “Do you wanna witness masti? Then get ready to watch Kajol and Salman Khan slay tonight on Shanivaar Ka Vaar.”

Salaam Venky will release on December 9. The film is directed by Revathy. It also stars Vishal Jethwa in the lead role. The story revolves around a mother-son duo and how they navigate through every challenge thrown at them. Aamir Khan is also part of the film. At the time of announcing the release date, Kajol said, “Ek Badi Zindagi ka Bada Celebration is about to begin. #SALAAMVENKY Trailer out on November 14th. Catch the incredible journey of Sujata and Venkatesh only in cinemas on 9th December!”Giving a shout-out for his wife, Ajay Devgn wrote, “Have heard super stuff on Salaam Venky. It’s going to be emotionally charged and entertaining. Congratulations, Kajol.”

According to Kajol, “Promotions are always fun when you have people matching your vibes.”

Aahana Kumra, Rahul Bose, Rajeev Khandelwal, Prakash Raj and Anant Mahadevan are also part of Salaam Venky. The project was announced in October last year. The film went on floors in February this year. Along with a picture with Revathy clicked during the Muhurat shot, Kajol wrote, “Today we begin the journey of a story that needed to be told, a path that had to be taken and a life that had to be celebrated. We can’t wait to share this unbelievably true story of #SalaamVenky with you.”

Kajol was last seen in Tribhanga.