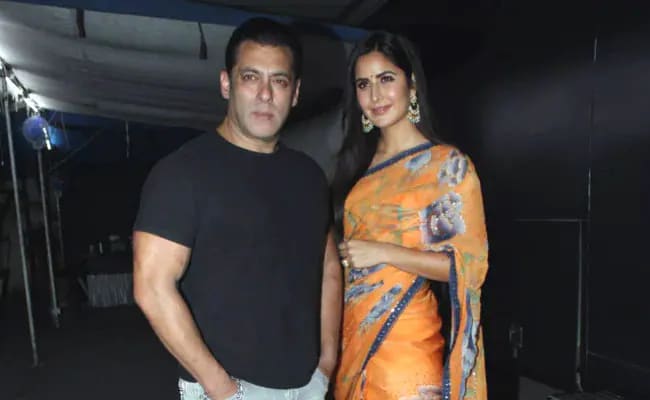 A throwback of Katrina Kaif with Salman Khan.

Katrina Kaif, who is busy with the promotions of her upcoming film Phone Bhoot, checked into the sets of Bigg Boss 16, which is hosted by Salman Khan. In a promo video from the Weekend Ka Vaar episode, Katrina Kaif can be seen asking Salman Khan who he would like to spy on if he turns into a ghost. The actor’s reply was Vicky Kaushal (who happens to be Katrina Kaif’s husband). Salman Khan said, “Ek banda hai uska naam Vicky Kaushal hai (There is a guy named Vicky Kaushal).” When Katrina Kaif asked the reason behind it, Salman said, “Loving hai, caring hai, ya daring hai. Uske baare mein baat karta hoon toh aap blushing hai (He is loving, caring or daring. When I talk about him, you blush).” Katrina Kaif couldn’t help but smile after hearing Salman’s answer.

Katrina Kaif married Vicky Kaushal in December last year, after dating for 2 years. They hosted big, fat wedding festivities in Sawai Madhopur, Rajasthan. They hosted a private wedding in the presence of family members and very few friends from the film industry.

Salman Khan introduced Katrina Kaif in Bollywood and they were said to be dating for a few years. The duo have co-starred in films such as Ek Tha Tiger, Tiger Zinda Hai, Maine Pyaar Kyun Kiya and Partner among others. Salman Khan also made guest appearances in several films which featured Katrina. The duo were last seen together in the 2019 film Bharat. They will next co-star in Tiger 3.