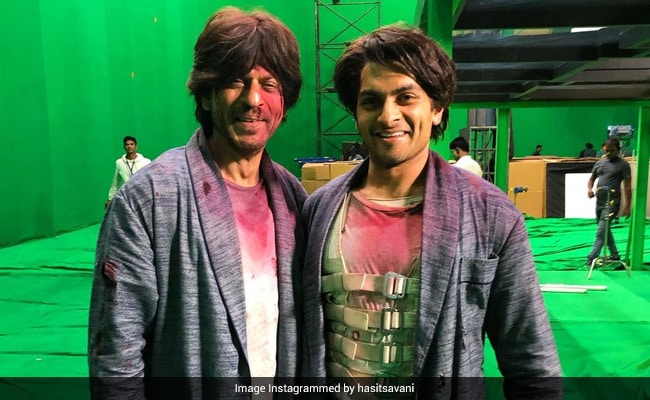 Hasit Savani, who was Shah Rukh Khan’s stunt double in Brahmastra has shared a picture with the superstar. On Instagram, he shared a throwback photo from the sets of the movie and wrote a sweet caption. In the image, Hasit and Shah Rukh can be seen in similar outfits – a white T-shirt drenched in blood paired with matching pants and a grey shrug. Both can be seen smiling as they pose for the camera. In the caption, Hasit wrote, “A real pleasure to be the stunt double for the legend, Shah Rukh Khan, for his cameo sequence in Bollywood film Brahmastra.”

Soon after Hasit shared the post, Shah Rukh Khan’s fans flooded the comment section. A fan wrote, “You lucky man,” while another wrote, “Our Vanarastra from Brahmastra.”

In Brahmastra, Shah Rukh played the role of scientist Mohan Bhargav who wielded Vanarastra. Despite getting limited screen time, the superstar stole the show with his performance. Helmed by Ayan Mukerji, the movie featured Alia Bhatt, Ranbir Kapoor, Amitabh Bachchan, Nagarjuna and Mouni Roy in the lead roles.

The film was well received by the audience and the critics. So far, the film has earned about Rs 300 crore worldwide, as per the makers. On Friday, Ayan Mukerji shared a post on his Instagram handle and wrote, “Week 2 Begins”. Check out the post below:

Meanwhile, on the work front, Shah Rukh Khan will be next seen in Pathaan, co-starring Deepika Padukone and John Abraham, Jawan with Nayanthara and Dunki.