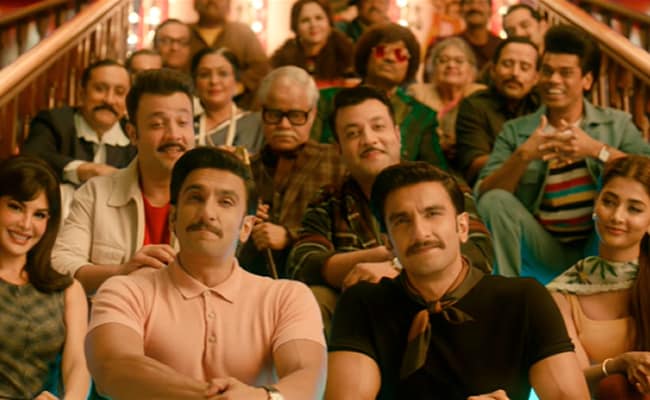 A still from the teaser. (courtesy: T-Series)

Ranveer Singh and Rohit Shetty have proved that they make a great team with their 2018 hit Simmba. Now, they are back with another fun offering, Cirkus, which features Ranveer in a double role. Ahead of the trailer release of the film this week, the team has shared a teaser of the comedy that features Ranveer in a double role. The teaser features the hero – two heroes to be precise – seated with other characters speaking about the “good old days”. For instance, Sanjay Mishra and Johnny Lever take us back to the 1960s with analogies such as children asking their grandparents to help and not Google. There are also mentions of days that saw “news” and “not breaking news”. The love of parents was more important than social media likes, one character mentions.

This is the era their film is set in, the cast declares, and also announces that Cirkus is releasing ahead of Christmas. Sharing the video, Ranveer Singh said, “Welcome to our world. Trailer coming out on 2nd December.” Along with Ranveer, the film features Pooja Hegde, Jacqueline Fernandez, Johnny Lever, Sanjay Mishra, Varun Sharma, Tiku Talsania, Vrajesh Hirjee among others.

Over the weekend, Ranveer Singh shared an image with Rohit Shetty, Varun Sharma, Pooja Hegde and Jacqueline Fernandez. In the caption, he said, “Let the madness begin.”

Earlier this month, Ranveer Singh announced the wrap of the film and said, “Shooting khatam, Promotion ki planning shuru! Mass-ter filmmaker ke Mass-ter plans!!! Buahahahaha! #CirkusThisChristmas.” In the photo, Ranveer is sitting with Rohit Shetty and Varun Sharma and sharing a laugh, with vintage cars and a board with “Cirkus” written on it behind them.

Varun Sharma reacted to the post by saying, “Fullll Powerrrrrr,” with heart and fire emoticons.

Cirkus is jointly produced by Rohit Shetty Picturez, Reliance Entertainment and T-Series. It will release in theatres on December 23. In addition to Cirkus, Ranveer Singh will also be seen in Rocky Aur Rani Ki Prem Kahani with Alia Bhatt.

Rapid Fire With The Cast Of Bhediya