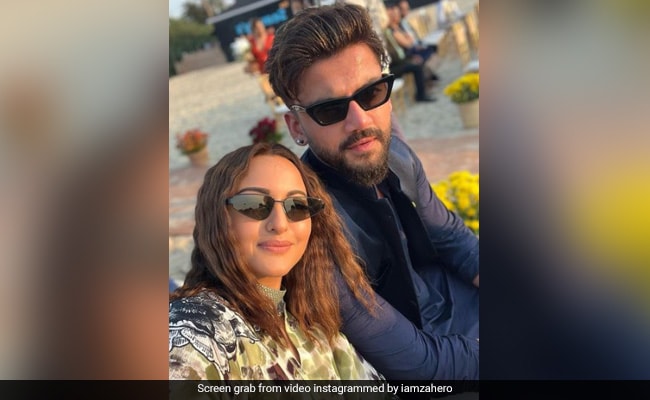 Sonakshi Sinha and Zaheer Iqbal are rumoured to be dating. Zaheer often shares pictures with Sonakshi Sinha and the two are spotted together on many occasions. Recently, Varun Sharma shared a picture of the rumoured couple on his Instagram story and wrote, “Oyeeee hoyeeee isey kehte hai blockbuster Jodi.” In the story, which is now unavailable, Sonakshi and Zaheer could be seen sharing a laugh. Sonakish can be seen wearing a white bodycon outfit, which she paired with a blazer. While Zaheer sported a casual look. Although the picture is now unavailable, the screenshots of Varun’s stories are doing rounds on the Internet.

Check out the picture here:

Sonakshi Sinha gets spotted with boyfriend Zaheer Iqbal at a plush restaurant in town; Varun Sharma calls them ‘blockbuster jodi’#SonakshiSinha#ZaheerIqbal@varunsharma90#VarunSharma#Bollywoodpic.twitter.com/5b9heUvGlM

Blockbuster Jodi is reportedly a song that the duo has been working together for, however, no official announcement has been made yet.

Sonakshi and Zaheer have maintained that they are “just friends.” Zaheer, who made his Bollywood debut with the film Notebook is often seen sharing pictures of Sonakshi Sinha on his Instagram handle.

On Sonakshi’s birthday, Zaheer shared a couple of pictures and video on his Instagram handle, wishing the actor. His caption read, “Happy Birthday Sonzzz. Thank You for not killing me. I Love You. Here’s to a lot more food, flights, love and laughter. P.s – This video sums up the entire time we’ve known each other.

Here is another post of Zaheer, which features Sonakshi Sinha:

Meanwhile, Varun Sharma was last seen in the 2021 film Roohi, starring Rajkummar Rao and Janhvi Kapoor in the lead roles.