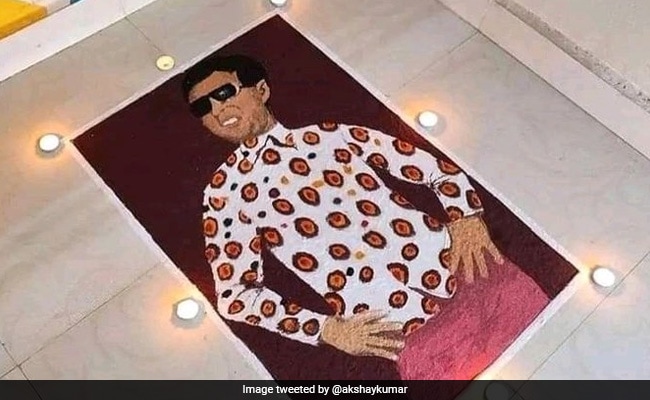 The rangoli that brought a smile on Akshay’s face. (courtesy: akshaykumar)

Akshay Kumar, on Friday evening, scooped some time from the promotional duties of his upcoming film Ram Setu and replied to a fan’s tweet. And not just any tweet. The fan had shared a picture of a rangoli inspired by Akshay Kumar’s famous Hera Pheri scene – the meme-worthy “25 din mein paisa double” one. “Dear Akshay Kumar award winning Rangoli in my office. I hope you like this,” tweeted the fan along with a picture of the rangoli. Akshay Kumar’s reply was: “Like this? I love it! Hope it brings a smile on all the visitors face like it did on mine. Happy Diwali wishes in advance.”

Like this? I love it! Hope it brings a smile on all the visitors face like it did on mine
Happy Diwali wishes in advance https://t.co/5KTdiejnZj

The actor has a super busy schedule ahead. He will next feature in Ram Setu with Nushrratt Bharuccha and Jacqueline Fernandez, which is slated to release on 25 October. He will also star in Bade Miyan Chote Miyan with Tiger Shroff and Selfiee with Emraan Hashmi. He will also star in the Hindi remake of the National Award winning Soorarai Pottru, alongside Radhika Madan and a cameo appearance by Suriya, who won the National Award for his performance in the original film.