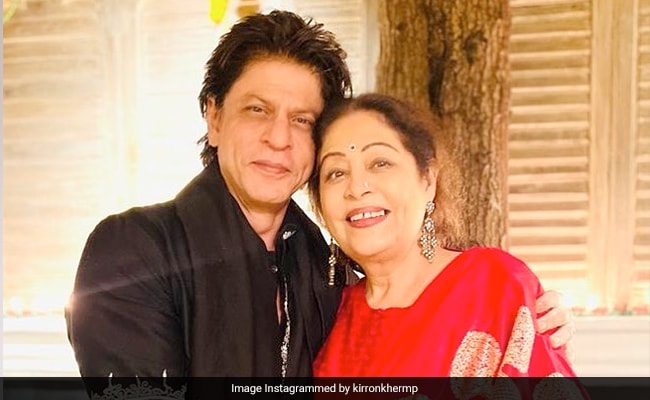 Kirron Kher has treated her Insta family to an adorable picture of her with Shah Rukh Khan. Kirron Kher and Shah Rukh Khan attended the Diwali party hosted by Amitabh Bachchan on Monday. In the image, the veteran actress looks beautiful in a bright red suit while Shah Rukh looks handsome in a traditional black and white ensemble. Shah Rukh can be seen hugging the actress as they happily pose for the camera. Sharing the post, Kirron Kher wrote, “Last night with my dear friend Shahrukh. So wonderful meeting old friends for Diwali” Kirron Kher and Shah Rukh Khan have been part of several films, including Kabhi Alvida Naa Kehna and Main Hoon Na.

Soon after Kirron Kher shared the post, fans flooded the comment section. A user wrote, “He just made my day,” while another wrote, “Yeh Pic ko dekh kar Main Hoon na movie yaad aagyi…” Check out the post below:

Kirron Kher has also shared a picture with Amitabh Bachchan, who can be seen in a yellow kurta set. In the next image, she can be seen posing with her son Sikander Kher and Abhishek Bachchan. Sharing the post, she wrote, “Diwali with the Bachchans”

On Monday, Kirron Kher shared a picture with Rani Mukerji and captioned it as “With dearest Rani at the Chopra’s last night. Great evening chatting with old friends.” Check out the post below:

Meanwhile, on the work front, Kirron Kher was last seen in the film Khoobsurat, starring Sonam Kapoor and Fawad Khan.

Shah Rukh Khan, on the other hand, has three films in his kitty – Pathaan, Jawan and Dunki.