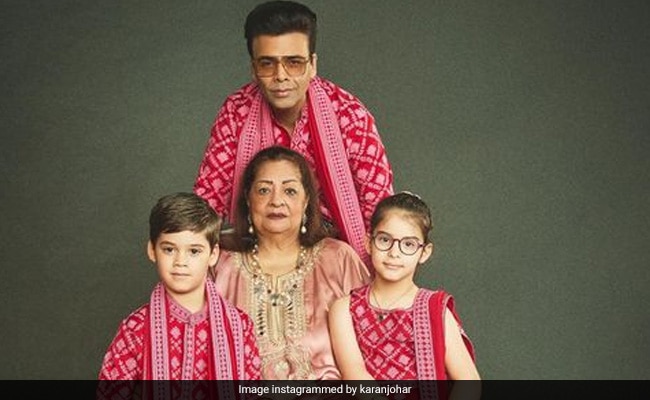 Filmmaker Karan Johar wished his Instafam on Diwali with the most adorable set of pictures. He shared pictures with mom Hiroo Johar and his kids Yash and Roohi. The family of four can be seen wearing matching pink outfits in the picture. Karan Johar wrote in his caption: “Happy Diwali from my world to yours! Thank you Manish Malhotra for our beautifully coordinated clothes… Sending you all so much love and light.” In the comments section, Anil Kapoor dropped heart emojis. “So cute,” wrote Amrita Arora. “Lots of love always,” commented Manish Malhotra.

This is what Karan Johar posted on Diwali:

Karan Johar welcomed Yash and Roohi via surrogacy in the year 2017. The filmmaker also launched a picture book for kids titled The Big Thoughts Of Little Luv, which was inspired by his experiences as a single parent. He announced the project last year and he wrote: “Am excited to share something special with all of you… my first picture book for kids The Big Thoughts Of Little Luv.”