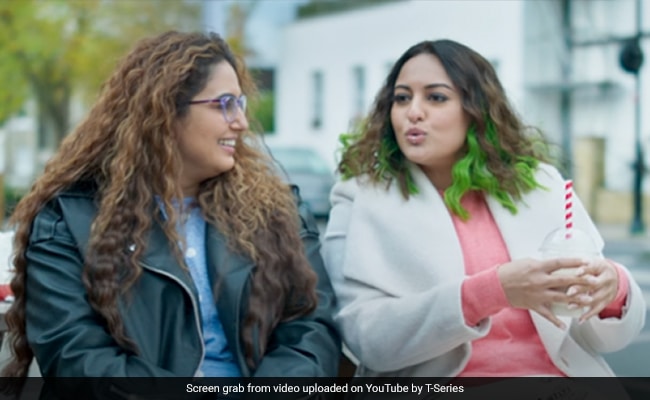 The makers of Sonakshi Sinha and Huma Qureshi’s Double XL released the first teaser of the film. On Thursday, Double XL‘s production company T-Series, shared a thirty-second-long teaser, featuring the film’s lead actors Sonakshi and Huma. In the video, the duo can be seen wearing oversized outfits and sitting on a bench in a foreign land. The teaser begins with Huma Qureshi joking about the world managing to find body fat even when an individual is wearing oversized clothes. Sonakshi too adds to the conversation and complains about the boys looking for unrealistic body types. The two friends are then seen taking a jibe at the guys and bursting into laughter.

Take a look at the teaser here:

Sharing her film’s teaser on Instagram, Sonakshi wrote, “From fries to fun… all good things in life come in #DoubleXL sizes! A story of friendship and dreams filled with masti is coming to CINEMAS near you on 14th Oct 2022.”

Double XL, touted to be a story of friendship is directed by Satramm Ramani. The film will also feature Sonakshi Sinha’s rumoured boyfriend Zaheer Iqbal and actor Mahat Raghavendra in the lead roles. On the work front, Sonakshi Sinha was last seen in Salman Khan’s 2019 film Dabangg 3. Meanwhile, Huma Qureshi was last seen in Ajith Kumar’s Valimai and had a brief appearance in Alia Bhatt’s film Gangubai Kathiawadi.