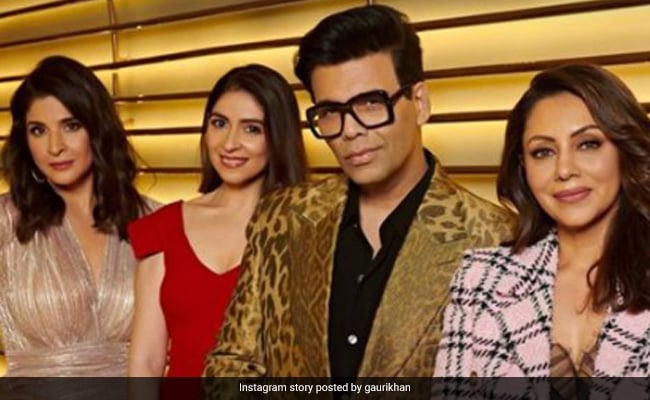 On the heels of the release of the second season of Netflix reality show Fabulous Lives of Bollywood Wives, Gauri Khan is all set to appear on Koffee With Karan 7. Her appearance is the first one she has made on the show in nearly two decades, the only other being in 2005. However, the long gap away from the sets of Koffee With Karan has not fazed her at all. Speaking to NDTV, the designer-producer said that filming the show felt much like “having coffee at home” with friends.

“I’m going on Koffee With Karan after, I think, 18 years and it was a lot fun because my friends were with me. Maheep (Kapoor), Bhavana (Pandey), and Karan… it was more like just having coffee at home with them” said Gauri Khan.

Working with a cast Gauri Khan was familiar with, surely seemed to ease the process of filming regardless of whether it was Koffee With Karan or Fabulous Lives of Bollywood Wives. Speaking about filming the latter, she told NDTV that “shooting with friends was more like just having a great time”.

“It was great fun. Just shooting with everyone and just having a laugh over a cup of coffee. It didn’t feel as if it was a hectic shoot so I really enjoyed myself,” she added.

The promotional video for the upcoming episode certainly reflects the kind of atmosphere Gauri Khan was speaking about as well. In the promo, Gauri Khan is seen speaking about what dating advice she would give to her daughter Suhana and describes her relationship with Shah Rukh with the movie title Dilwale Dulhania Le Jayenge.

If the promo and Gauri Khan’s own words are anything to go by, the next episode of Koffee With Karan is not one to miss. The show streams on Thursday on Disney+ Hotstar.