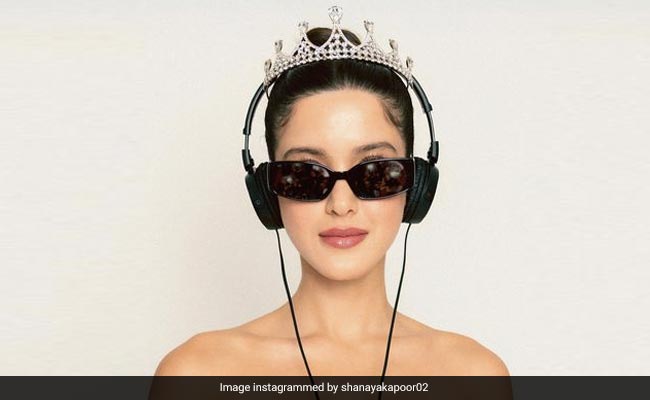 For Orhan Awatramani’s Halloween party, young Bollywood celebs showed up in fun spooky outfits or resembling characters from films, TV shows and books. From Sara Ali Khan to Ananya Panday, the Halloween bash was a star-studded affair. But our personal favourite was Shanaya Kapoor, who took inspiration from Mia Thermopolis (played by Anne Hathaway) from the film The Princess Diaries. Shanaya picked a white strapless dress with minimal print and paired it with gloves, socks and sneakers in the same hue. If you are still second-guessing the similarity between Shanaya and Princess of Genovia, these pictures will put an end to your doubts.  In an Instagram post, Shanaya shared pictures of herself as well as Anne Hathaway’s character from the film. For the caption, she picked a famous dialogue from the film and wrote, “Me, a princess? Shut up”.

Replying to the post, Shanaya Kapoor’s father Sanjay Kapoor wrote, “Which one is you?” Shanaya’s mother Maheep Kapoor declared that she is “my queen.” BFFs Ananya Panday and Suhana Khan couldn’t stop themselves from dropping loved-up notes for Shanaya. As per Ananya, the look is “iconic”. Suhana wrote, “Stunning” along with heart eyes emojis.   “Shutuppppp! I am obsessed,” commented Akansha Ranjan Kapoor.

Meanwhile, Ananya Panday channelled her inner Poo for the Halloween get-together.  Along with a video from her dressing up time, she wrote, “It’s my birthday today and it’s Halloween tomorrow so obviously I had to dress as my all-time favourite POO! Obviously not even a patch on Kareena Kapoor Khan, I’m just a fan having a gala time. Don’t shout at me, Karan Johar.”