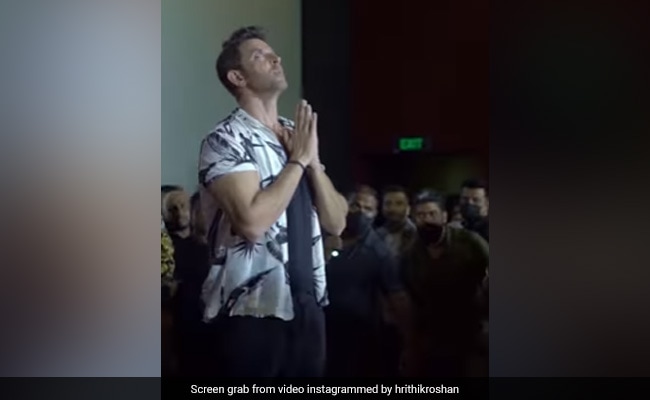 Hrithik Roshan, who is all set for the release of his upcoming film Vikram Vedha, also starring Saif Ali Khan in the lead role, shared a video from the day of the film’s trailer release on September 8. On Tuesday, Hrithik shared a video from the event on his Instagram and wrote, “To be surrounded by all your love is truly a blessing! Thank you to all you beautiful people for attending the #VikramVedhaTrailer preview and empowering us with your love & cheer” with a heart emoji. Team Vikram Vedha had organised a special photo contest a day before its trailer release, whose winners could be the part of film’s trailer preview.

In the video, Hrithik in a casual outfit can be seen watching the film’s trailer with the crowd present at the event and speaking to them. The video, which has the film’s track playing in the background, also features Radhika Apte, filmmaker duo – Gayathri and Pushkar – and Rohit Saraf among others.

Hrithik’s post caught the attention of his girlfriend Saba Azad, who dropped a smiley, heart, and strength emojis in the post’s comment section. Others who commented on the actor’s post were, his Koi… Mil Gaya co-star Preity Zinta, Sonali Bendre, Zoya Akhtar, and Zayed Khan among others.

Vikram Vedha is all set to hit the big screens on September 30.