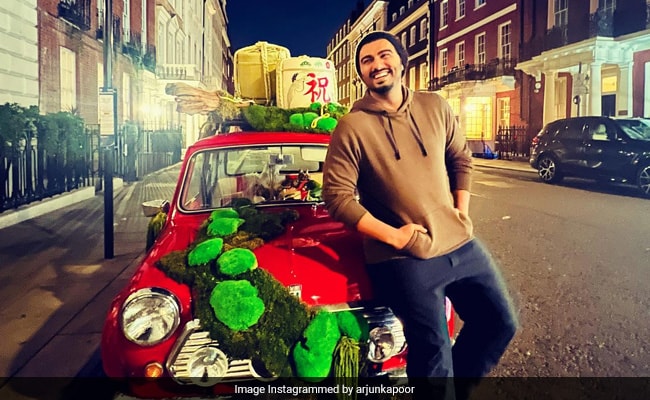 Arjun Kapoor, who is currently in London for the shoot of his untitled film with Bhumi Pednekar, recently visited a friend’s restaurant in the city. The actor, who seems like he had a fun night, had a special photographer to capture his moment and it was none other than his co-star Bhumi Pednekar. How do we know? On Wednesday, Arjun shared a picture of himself on Instagram in a casual outfit, smiling and leaning to a car, which is all decked up.

Sharing the picture, the actor wrote, “That moment when you eat at your friend’s new restaurant and you feel proud, happy and satiated!” Arjun’s post soon caught the attention of Bhumi Pednekar. Reacting to the picture, the actor wrote, “The photographer is top btw (short for by the way) Arjun Kapoor” with a rocket emoji. To which, Arjun replied, “Bhumi Pednekar, yeah, I made sure the photographer was well fed so she shoots me well” with laughing emojis.

Just a few days ago, Arjun had his girlfriend Malaika Arora visiting him in London. The couple had a small vacation together, during which, they went to watch Chelsea match.

Check out a few of the couple’s posts here: