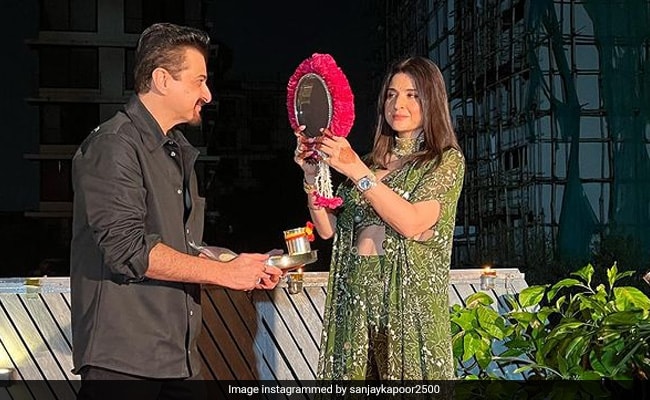 How much fun Maheep Kapoor and her husband, actor Sanjay Kapoor, had at their Karwa Chauth celebrations? Quite a lot, as per the pictures shared by the actor on Friday. Here, the two look super adorable. In one of the frames, we can also spot their son Jahaan Kapoor. Maheep, as always, looks stunning in a bottle-green outfit. Along with the pics, Sanjay Kapoor has just used the hashtags, “About last night” and Karwa Chauth.” It seems Sanjay Kapoor missed the photo credit part. How do we know? Just check Bhavana Pandey’s comment under the post. It read, “Photo credit?” Maheep Kapoor didn’t miss her husband’s sweet gesture. She reacted with a bunch of red hearts.

The pictures were clicked at the Karwa Chauth party hosted by Sunita Kapoor and Anil Kapoor. Take a look:

Sanjay Kapoor has also shared a picture from the Karwa Chauth festivities on Instagram Stories. Check it out here:

On Karwa Chauth, Sanjay Kapoor took a trip down memory lane and wished Maheep Kapoor by posting a couple of throwback pictures. These snaps are from Karwa Chauth festivities held in different years. In the first two photos, the actor can be seen adorably holding a sieve for his wife. They look stunning together. Sharing the blasts from the past moment, Sanjay Kapoor wrote, “Happy Karwa Chauth, Maheep Kapoor.” She reacted to the wish with red heart icons.

Maheep and Sanjay Kapoor have been celebrating the festival with her “Karwa Chauth gang” at Sunita Kapoor’s house for many years. Want to see pictures of their celebrations over the years? Maheep Kapoor’s recent post is the answer to your throwback craving. She wrote, “Happy Karwa Chauth ladies. Throwback memories. Spot the Moon.” Her post made Anil Kapoor nostalgic. He commented, “Nostalgia…Happiness forever, Maheep”. Sunita Kapoor said, “Love these pics.”