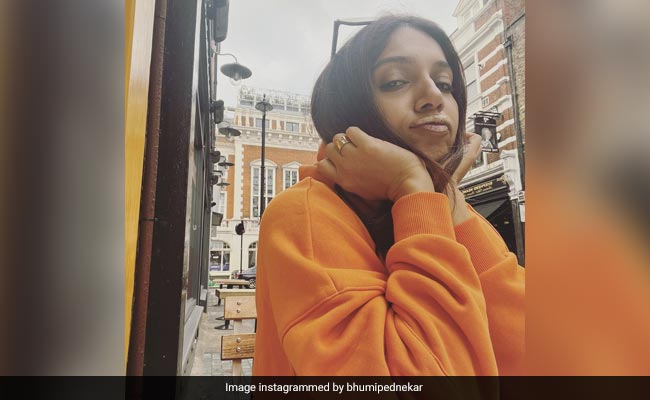 Bhumi Pednekar, who is busy shooting for her upcoming movie The Lady Killer with Arjun Kapoor, has shared goofy pictures from her London diaries. In the first image, Bhumi can be seen posing with a cup of coffee with froth smeared on her lips. In the second image, she happily posed for the camera showing off her lips covered with coffee froth. The actress looks pretty in an orange sweatshirt paired with huge sunglasses. Sharing the post, she wrote, “A casual london morning” Soon after she shared the post, Rakul Preet Singh wrote, “Cutieee”

Bhumi Pednekar keeps her Insta family updated by sharing pictures and videos from her London diaries. A week ago, Bhumi shared a ROFL video that shows her and Arjun Kapoor goofing around on the streets of Glasglow. Sharing the post, she wrote, “Dumb & Dumber do Glasgow” Soon after she shared the post, Rhea Kapoor commented, “This gives me production anxiety,” while Bhumi wrote, “Always trolling me,” and tagged Arjun Kapoor.

A few days ago, she also shared some happy pictures in which she looks pretty in a white sweater and wavy hair. In the caption, she wrote, “Moody Monday”