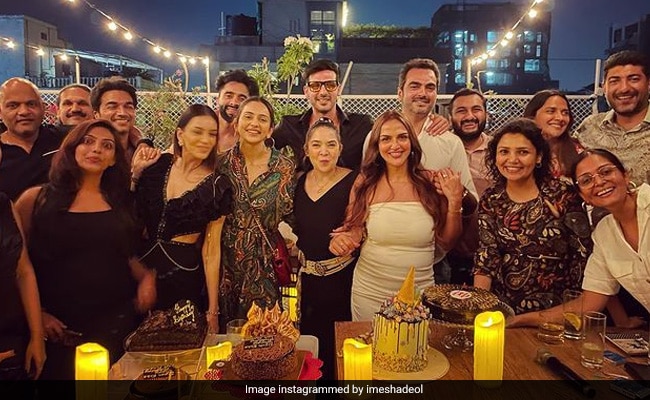 Esha Deol celebrated her 41st birthday on Wednesday with her family and friends by her side. She lit up our Instagram feed with pictures from her birthday party. Along with the actress’ parents Dharmendra-Hema Malini, her husband Bharat Takhtani and her sister Ahana Deol Vohra, Esha’s friends also added glam to her bash. Tusshar Kapoor, who worked with Esha in a couple of films including Kyaa Dil Ne Kahaa, was also at the party. Actress Rakul Preet Singh and her boyfriend, actor-filmmaker Jackky Bhagnani, also had a lot of fun with the birthday girl. Zayed Khan attended the birthday bash with his wife Malaika Khan and cousin Fardeen Khan. TV couple Smriti Khanna and Gautam Gupta were there too. At the celebrations, Esha Deol was looking every bit gorgeous in a white bodycon dress.

While a picture shows her posing happily with Hema Malini and Dharmendra, others feature the actress laughing with all her heart next to her husband and their friends. Sharing the photo album from her birthday celebrations, Esha Deol wrote, “Thank you all for the lovely birthday wishes and blessings. Much love and gratitude.”

Esha Deol received a belated birthday wish from actor Sanjay Kapoor in the comments section of her post. He wrote, “Belated happy birthday. Lots of love.” Malaika Khan, in her comment, called her friend Esha a “special soul.”

On her birthday, Esha Deol shared a fitness tip with her fans. She posted an Instagram Reel featuring her doing push-ups on the beach. The clip is from her family vacation. Esha wrote, “Keep getting fitter and stronger. Much gratitude (heart icon). Here is my birthday tip for you – Take out at least 30 minutes for yourself every day and do some form of exercise. I swear by a mix of cardio and weight training. It’s something that will help you stay strong and independent long term. So, go hustle for that muscle. It has the power to keep us going on. Stay fit. Love you all.”