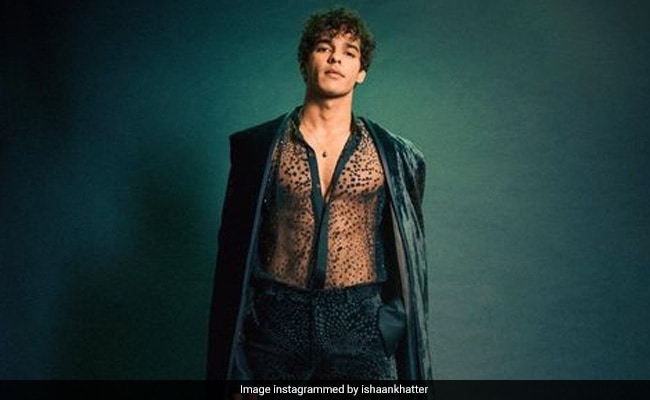 Does Ishaan Khatter belong to the Slytherinhouse? Going by his latest post, it is safe to say yes. Right, Potterheads? The actor, on Friday, shared a set of photos where he looks every bit dashing. So much so that the pictures made his dad Rajesh Khattar, mom Neliima Azeem, sister-in-law Mira Rajput and other celebs go “wow.” Ishaan wore a mesh green shirt with intricate designs and paired it with similar shade velvet trousers and a long shrug for the GQ Men Of The Year awards. The ensemble is from the designer duo Rohit Gandhi and Rahul Khanna’s label. Ishaan, sharing the photos, asked his Instafam, “Does this make me Slytherin?” Needless to say, his pictures drew the attention of his family and friends in no time. The comments section was filled with fiery reactions within a couple of hours.

Mrunal Thakur’s comment read, “Yes” while Malavika Mohanan wrote, “Dayum this is too cool (snake and fire emoji).” Sayani Gupta dropped a “you looked (hot)” note under the post.

Ishaan Khatter has undergone a major physical transformation since his debut film Dhadak. The actor often sets Instagram on fire with his shirtless pictures.

On the work front, Ishaan Khatter was last seen inPhone Bhoot. He co-starred with Katrina Kaif and Siddhant Chaturvedi in the film. Ishaan has Raja Menon’s Pippa lined up.