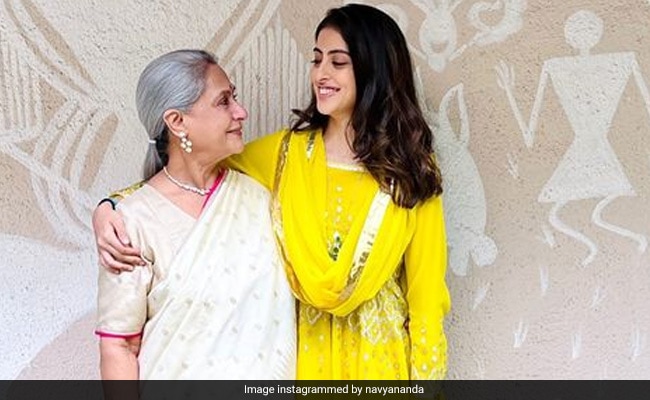 Jaya Bachchan was at her candid best during her granddaughter Navya Naveli Nanda’s podcast What The Hell Navya, where she was joined by daughter Shweta Bachchan. The topic of discussion was ‘Modern Love: Romance and Regrets.’ During the podcast, Jaya Bachchan talked about physical attraction and compatibility and told Navya how important it is. Jaya Bachchan said, “People will find it objectionable coming from me but physical attraction and compatibility are also very important. In our times we couldn’t experiment but today the generation does and why shouldn’t they? Because that also is responsible for a long-lasting relationship. If there isn’t a physical relationship it’s not going to last very long. You can’t be lasting on love and fresh air and adjustment, I feel. It’s very, very important.”

The veteran actor added how the notion of relationships was very different during her time compared to that of her daughter Shweta and how it has changed over the course of years. “Sometimes it’s a pity but a lot of the younger lot, of course, we never could, we couldn’t even think about it but the younger generation even after me, Shweta’s generation, Navya’s is a different ballgame, but they would feel guilty going through that experience and I think it’s very wrong. It’s okay and then you do things on the sly. If you had a physical relationship and you feel that still, my relationship otherwise not worked out you can be nice about it,” the veteran actor added.

Jaya Bachchan shared a piece of advice and told her granddaughter Navya, “I’m looking at it very clinically. Since there’s a lack of that emotion, the romance today…I think you should marry your best friend. You should have a good friend, you should discuss and say, ‘Maybe I’d like to have a child with you because I like you, I think you’re nice, so let’s get married because that’s what society’s saying’. I have no problem if you have a child without a marriage also, I really don’t have a problem.”

Jaya Bachchan married Amitabh Bachchan in June 1973 and they have featured together in films such as Zanjeer, Sholay, Abhimaan, Mili, Chupke Chukpe and Silsila, among many others. Jaya Bachchan appeared only in a handful of films after the birth of Shweta and Abhishek Bachchan. In more recent years, Big B and Jaya appeared together in movies like Kabhi Khushi Kabhie Gham and the 2016 film Ki And Ka. Jaya Bachchan will next be seen in Karan Johar’s directorial Rocky Aur Rani Ki Prem Kahani. The film also stars Alia Bhatt, Ranveer Singh, Dharmendra and Shabana Azmi.