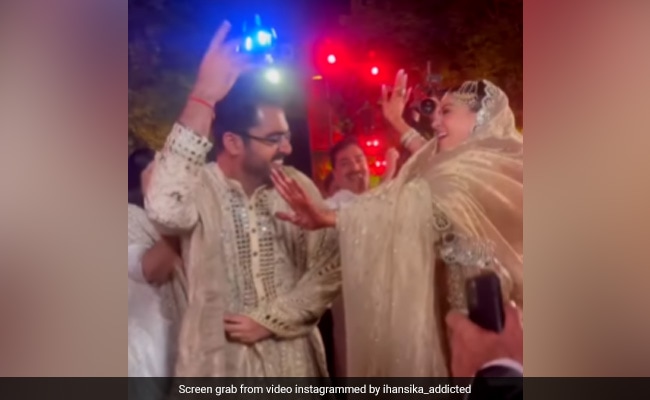 Hansika Motwani in a still from the video. (courtesy: ihansika_addicted)

Actor Hansika Motwani, who is all set to marry Sohail Kathuria at the Mundota Fort and Palace in Jaipur, Rajasthan on December 4, danced her heart out during a pre-wedding ceremony on Friday night. The couple reportedly hosted a Sufi night on Friday and videos and pictures from the ceremony are trending big time. In one of the videos, Hansika can be seen dancing with fiance Sohail. In another video, the couple can be seen happily posing together. For the occasion, the couple wore matching ivory outfits. Sohail Kathuria, a Mumbai-based businessman proposed to Hansika Motwani in front of the Eiffel Tower in Paris in November.

Here’s another video from the ceremony:

ICYMI, pictures from the mehendi ceremony:

Sohail Kathuria, a Mumbai-based businessman proposed to Hansika Motwani in front of the Eiffel Tower in Paris in November. She shared pictures from the dreamy moment on her Instagram profile and she wrote: “Now and forever.”

Hansika Motwani has been a part of Hindi, Tamil, Telugu, Malayalam and Kannada films. She made her debut as an actor with the 2001 television show Des Mein Niklla Hoga Chand and became a household name for her performance in the popular kids fantasy show Shaka Laka Boom Boom, which also aired in the same year.