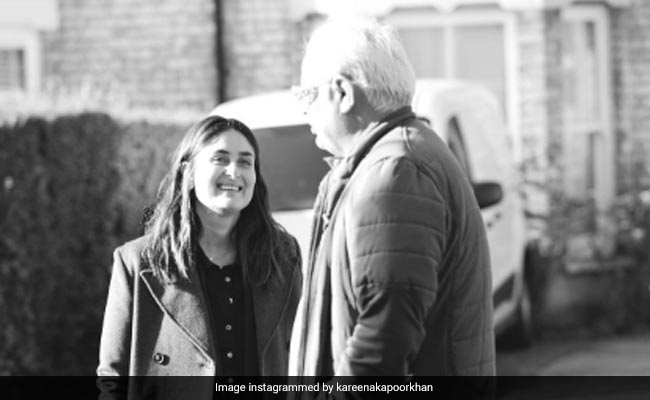 Kareena Kapoor, who was busy shooting for Hansal Mehta’s untitled film in London, recently shared a post with the filmmaker on her Instagram handle and called herself “a director’s actor” and also praised her filmmaker Hansal Mehta. On Thursday, the actor shared two monochrome pictures of herself with filmmaker Hansal Mehta from London. In the first picture, the actor-filmmaker duo can be seen having an intense conversation, while in the second picture, Kareena can be seen laughing. Sharing the pictures, Kareena wrote, “A director’s actor… always. Easy, sharp, instinctive and cool… been an absolute pleasure… Hansal Mehta. This one is special guys. Mumbai see you soon.”

On Wednesday, the actor gave glimpses of her shoot for the film in London.

Hansal Mehta’s untitled project is special for the actor because she along with Ekta Kapoor is co-producing the film.

The untitled film is reportedly a murder-mystery inspired from true events.

Kareena Kapoor flew to London in October to shoot for the film. The actor announced the news by sharing a picture on her Instagram handle.

Kareena Kapoor then flew down to Mumbai to celebrate her 10th wedding anniversary with her husband Saif Ali Khan and Diwali. The actor flew back to London again after Diwali with her younger son Jeh.

Check out a few pictures of the actor from her London diaries:

On the work front, Kareena Kapoor was last seen in Aamir Khan’s Laal Singh Chaddha. The actor will be soon seen in Sujoy Ghosh’s The Devotion Of Suspect X, also starring Vijay Varma and Jaideep Ahlawat in the lead roles.

How Deepika Padukone And Kartik Aaryan Slayed At An Event