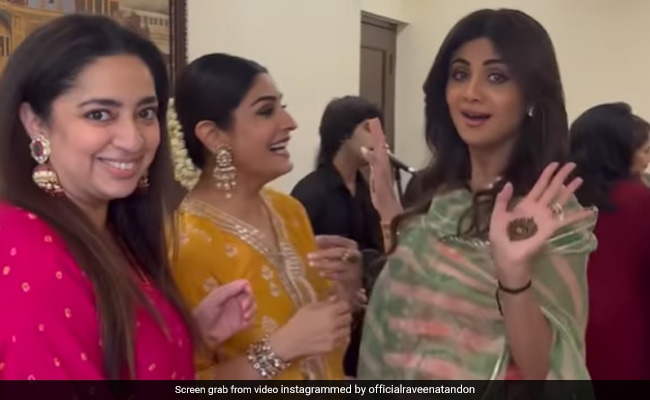 Shilpa and Raveena with a friend. (courtesy: officialraveenatandon)

Raveena Tandon curated a set of pictures and videos from her Karwa Chauth festivities and she shared them in an Instagram post on Thursday. Shilpa Shetty and other friends also joined Raveena Tandon for the festivities. In one of the videos posted by Raveena, Shilpa Shetty can be seen showing off her mehendi as Raveena Tandon smiles away. “Most of the time we all work hard and life takes over, time flies but festive season is when you let go…Live and let live, love, life, laugh, celebrate everyday… That’s what we all are about.” Thanking her friends in her caption, Raveena Tandon wrote: “Thank you for always being such amazing hosts.”

This is what Raveena Tandon posted:

The Mohra actress also shared an Instagram Reel. She gave a closer look at her OOTD and she wrote: “Love is in the air.” Karwa Chauth.” She wore a yellow outfit from the shelves of Shop Mulmul.

Meanwhile, on her Instagram story, Shilpa Shetty posted a clipping from her festivities – a glimpse of her mehendi and added the hashtags #mehendi and #KarwaChauth. On the work front, Shilpa Shetty was last seen in Sabbir Khan’s Nikamma. She was also seen as one of the judges on the TV reality show Super Dancer Chapter 4, alongside choreographer Geeta Kapoor and filmmaker Anurag Basu. The actress will next be seen in Rohit Shetty’s Indian Police Force. She stepped into Bollywood with the 1993 thriller Baazigar and is best-known for her performances in films such as Main Khiladi Tu Anari, Dhadkan, Life In A…Metro, Apne, to name a few.