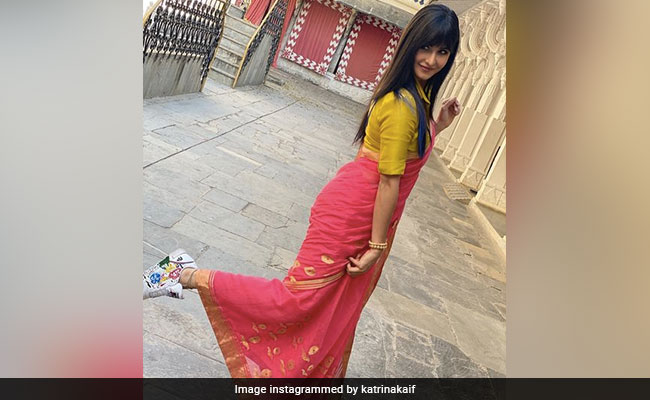 Every day is fun with Katrina Kaif around. The actress is also known for setting fashion goals. Give her any outfit, she will ace it like a pro. For a promotional event of her upcoming filmPhone Bhoot, Katrina Kaif decided to go for an Indo-Western look. She picked a pink saree and paired it with a collared blouse and quirky sneakers. Yes, she is cool like that. Katrina Kaif’s bangs and make-up were also on point. Sharing the photo, the actress wrote, “Ragini’s day out. Phone Bhoot” and added a ghost and a telephone icon. Ragini is the name of Katrina’s character in the film.

Katrina Kaif’s co-star Ishaan Khatter didn’t miss the chance to react to her post. Known for his hilarious comments, the actor wrote, “Fringini is back” along with a surprised face emoji. We will tell you the story behind “Fringini” later. First, take a look at Katrina Kaif’s post.

Wondering why Ishaan Khatter called Katrina Kaif “Fringini”? Because the actress and her bangs were quite popular on the sets of Phone Bhoot. It was, it is and will always be “a love story.” In this BTS clip, Katrina Kaif is being told to “always fly the fringe” while shooting for her scenes. That’s when we see Ishaan coming up with this new name. “Fringini gussa ho jaegi (Fringini will get mad),” he says while resting in between the shots.

“Ragini and her bangs – A love story,” Katrina Kaif captioned the video.

Katrina Kaif will play the role of a ghost for the first time onscreen in Phone Bhoot. The film stars Ishaan Khatter and Siddhant Chaturvedi as ghostbusters. The trio team up to carry out a plan benefitting all of them. In case you haven’t seen the trailer yet, check it out now:

Katrina Kaif was last seen in Sooryavanshi, in which co-starred with Akshay Kumar. Apart from Phone Bhoot, she has Tiger 3 lined up. The film, also featuring Salman Khan in the lead role, will release on Diwali next year. Katrina Kaif will also be seen in Sriram Raghavan’s Merry Christmas. It will mark her first film with South star Vijay Sethupathi.