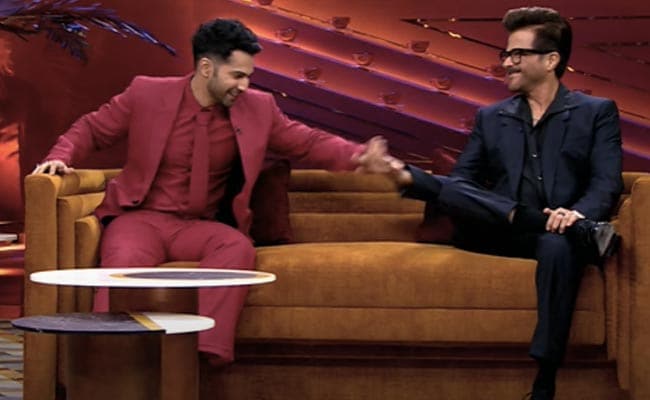 A still from the video. (courtesy: DisneyPlus Hotstar)

Anil Kapoor and Varun Dhawan are in the Koffee house! Karan Johar has shared a promo of the upcoming episode of Koffee With Karan and seeing the promo, it seems the episode will be fun. Anil Kapoor and Varun played the role of the father-son duo in KJo’s Jugjugg Jeeyo, co-starring Kiara Advani and Neetu Kapoor. The promo starts with KJo asking Anil Kapoor, “Three things that make Anil Kapoor feel younger.” His answer: “Sex, sex and sex,” leaving KJo and Varun in splits. However, he later adds, “This is all scripted”.

Next, Karan Johar asks Varun Dhawan, “Katrina Kaif or Deepika, an actress he wants to work with.” To this, he says, ” I always get told that I look like a kid so maybe…” but Karan intervenes and says, “You think they look older than you.”  Varun denies it and says, “No, I look younger…”. On hearing this, Karan says, “that means they look older than you”. Varun concludes this conversation by saying, “You are saying this,” leaving Anil Kapoor in splits.

“It doesn’t get younger & cooler than this on the Koffee couch – this duo will create a riot in this episode!!!” read the caption.