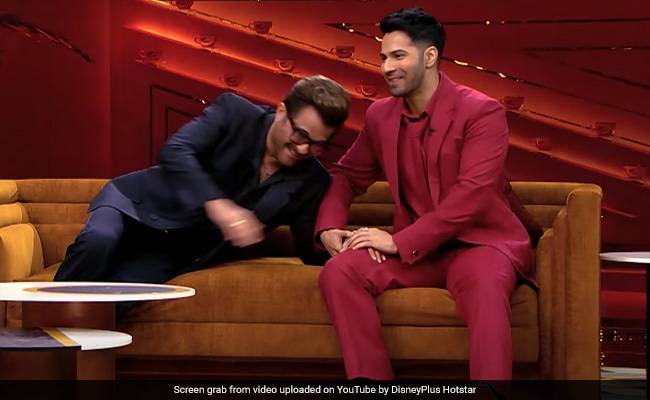 Anil Kapoor and Varun Dhawan in the show. (courtesy: YouTube)

Varun Dhawan took home the hamper after winning the Rapid Fire round on Karan Johar’s chat show Koffee With Karan 7 and he joked that the “proceedings from the hamper” will be sent to his friend Arjun Kapoor, who was name-checked several times in Varun’s Rapid Fire questions. In fact, he was name-checked in almost all the answers by Varun Dhawan and it was hilarious indeed. When asked who “brags the most,” Varun took Arjun Kapoor’s name. When asked who is most likely to gossip and flirt, Varun took (no points for guessing) Arjun’s name and said:”Shaukeen aadmi hai.” He added, “Arjun karta hai flirt kabhi kabhi (Arjun flirts occasionally).” When Karan asked: “Really? Is he sliding into people’s DMs?” Varun replied, “Once in a while, it’s all fine.”

Malaika Arora and Arjun Kapoor reportedly started dating in 2018. Malaika Arora was previously married to actor-filmmaker Arbaaz Khan. They were married for over 19 years and got divorced in 2017. They are parents to 18-year-old Arhaan. He went abroad for higher studies last year.

Varun Dhawan and Anil Kapoor, during the course of the show, also talked about their married lives, their careers and more. Varun won the Rapid Fire round and Anil Kapoor was given a prize for his performance during the buzzer round.