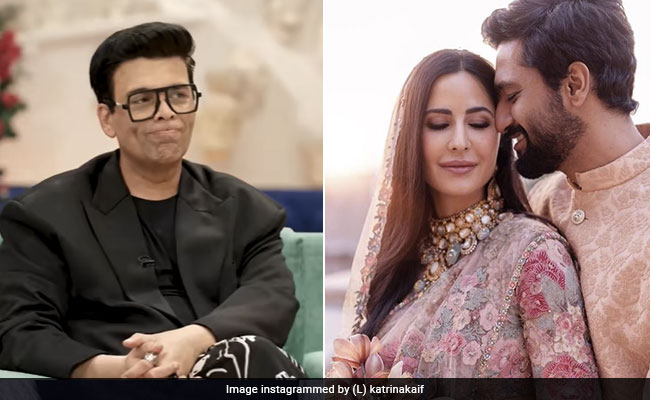 As Karan Johar is set to conclude the seventh season of his popular chat show Koffee With Karan, it’s KJo’s turn to spill some Koffee beans. During the final episode, Karan will be seen speaking about Katrina Kaif and Vicky Kaushal’s wedding and how it turned out to be embarrassing for him. The Kuch Kuch Hota Hai filmmaker said that after their wedding, people used to ask him why wasn’t he invited and is all good between Karan and Katrina-Vicky, as per a report in Hindustan Times.

“When Vicky and Katrina were getting married, it became very embarrassing for me. It got to a point where people were like you did not tell us about them, you are at the wedding and still not telling us etc! It got very embarrassing to admit that I had not been invited. Then after the wedding came the sympathies and doubts. People were like why weren’t you invited? Is everything ok between you guys?,” Hindustan Times quoted Karan Johar saying.

Vicky Kaushal was Anurag Kashyap’s Assistant director in Gangs Of Wasseypur. Also, he has been part of several films produced by Anurag Kashyap, such as Luv Shuv Tey Chicken Khurana and Bombay Velvet.

Katrina Kaif and Vicky Kaushal got married on December 9 last year in Sawai Madhopur, Rajasthan. The wedding was attended by their families and close friends, including Kabir Khan and Mini Mathur, and Sharvari Wagh.

Meanwhile, the finale episode will feature Tanmay Bhatt, Niharika NM, Kusha Kapila and Danish Sait as the jury members of the Koffee With Karan Awards. The episode will stream on Disney+Hotstar on September 29.