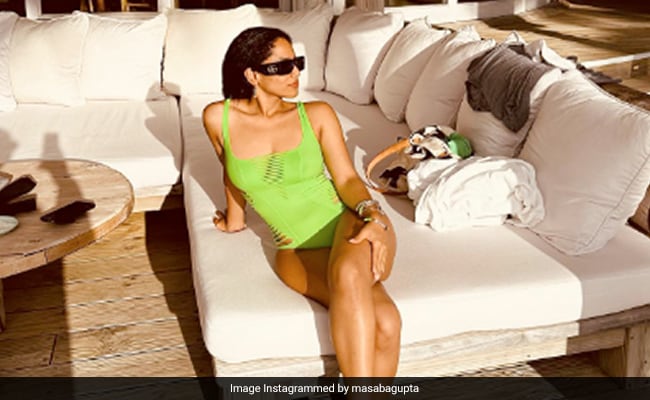 Hey, Instagram folks, Masaba Gupta’s latest post deserves your attention. The celebrated fashion designer is back with an album full of her glamorous looks. From monokinis to two-piece swimwear, we can’t get enough of Masaba. In one of the frames, we can spot chef Pooja Dhingra, who is one of Masaba’s closest friends. Already, excited? You must wait for the caption bit. Masaba, who is known for her choice of words, has taken reference from Jay-Z’s hit single 99 Problems. It read, “I got 99 swimsuits but 1 friend who will look crazy with me in Sheet Masks (seriously how does anyone look half normal in these things)? Pooja Dhingra I can’t #unpaidpartnership”. Fans have given a thumbs-up to her caption and flooded the comments section with fire and red hearts. Pooja Dhingra has replied to the post with a bunch of ROFL emojis.

Even Pooja Dhingra agrees with Masaba Gupta. Re-sharing the fashion designer’s post on her Instagram Stories, the chef reaffirmed, “Absolutely and full crazy.”

Masaba Gupta, who made her acting debut with Netflix’s web series Masaba Masaba, has often given us a sneak peek into her and Pooja Dhingra’s solid friendship. They are often accompanied by friend and producer Rhea Kapoor on outings. Pooja Dhingra was recently spotted at Rhea’s husband Karan Boolani’s birthday. She even shared glimpses of their getaway on Instagram.

Before this, Masaba Gupta shared a video featuring herself and Rhea Kapoor. Of course, there was a Pooja Dhingra mention. Check out the caption. It read, “Challenge you to find a video where Rhea Kapoor and I are looking up from our plates. #Foodislife…#Whyisitlifebut…Pooja Dhingra gathering footage over 4-5 years of my eating habits.”

Masaba Gupta was last seen in the second season of Masaba Masaba, which is loosely based on her life.