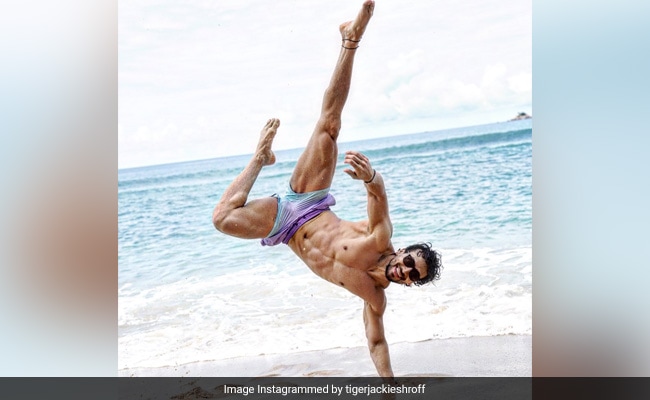 Tiger Shroff‘s latest picture has everyone’s attention. From Kunal Kemmu to Sophie Choudry, celebrities are unable to control themselves from admiring the actor’s “razor sharp” physique. Wondering what the pic is all about? It features Tiger Shroff, in beach shorts, striking an amazing pose amidst the beautiful surroundings. The actor has balanced his body on one hand. Oh boy. He makes it look so easy.  Replying to the picture, Kunal Kemmu said, “Razor sharp”. Tiger Shroff‘s Student Of The Year 2 director Punit Malhotra wrote, “Wowww.” As per Sophie Choudry, it is “casual posing”.  Tiger Shroff’s sister Krishna even has a name for the actor, “Quadzillaaa”. Their mom, Ayesha Shroff wrote, “Wowwwww. I lovvvve this pic.”Actor Rahul Dev has left a “Hello Tarzan” note under the post.

Before this, Tiger Shroff shared a glimpse of “just another day in the life of an action hero”. This was his caption too. Here, the actor, who is relaxing on a sofa, is getting a health check done.

Now, it is time to look at Tiger Shroff’s “first crush”. Can you guess? Oh, c’mon. It is an easy one. The answer is – the gym. Check it out here:

Tiger Shroff will be next seen in Ganapath. The film is bankrolled by  Vashu Bhagnani’s Pooja Entertainment. Ganapath, directed by Vikas Bahl, also Kriti Sanon in the lead role. It also marks Tiger Shroff and Kriti’s second project together after Heropanti. The two made their Bollywood debuts with the Sabbir Khan directorial, which was released in 2014.

Tiger Shroff was last seen in Heropanti 2. The film also featured his SOTY2 co-star Tara Sutaria, and Amrita Singh in key roles. Nawazuddin Siddiqui was also part of the film.