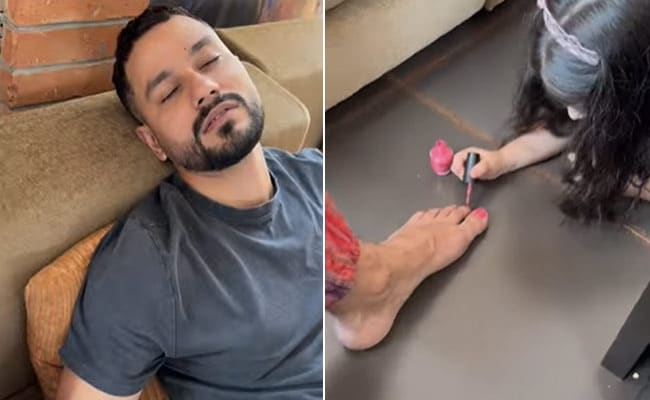 Cuteness alert. Courtesy: Soha Ali Khan. The actress has shared an oh-so-adorable video featuring her husband, actor Kunal Kemmu and their daughter Inaaya Naumi Kemmu and it screams father-daughter goals from miles away. The clip opens with little Inaaya applying nail paint on Kunal’s toe. The frame cuts straight to Kunal’s face, who is sleeping peacefully on a couch. The caption attached to the clip read, “Mid-morning naps can be hazardous.” In the background, we can hear the remix version of The Pink Panther Theme song. Shweta Bachchan was among the first to drop a red heart under the post. Inaaya’s aunt, Saba Pataudi said, “Lots of love to my inni jaan.”

Here is the video:

Well, Kunal Kemmu too has shared a pic of his painted nails on Instagram Stories. He wrote a hilarious note. It read, “Note to self: Never take a nap around a toddler with nail paint in hand.” On Inaaya Naumi Kemmu’s 5th birthday this year, Kunal Kemmu and Soha Ali Khan wrote an adorable note for their little bundle of joy. The two also dropped some pics from the birthday party. The caption read, “And, just like that… 5! 5 years of being called mama and papa. 5 years of having your heart walking around outside your body. 5 years of indescribable inexplicable indisputable love. A journey with the love of my life and 5 years with the life of our love.”

Soha Ali Khan and Inaaya Naumi Kemmu never fail to give us major mother-daughter goals. From twinning in traditional attire to performing puja aarti, the two are super cute.

During the Navratri festivities this year, Soha Ali Khan dropped a video from their puja aarti. Here, Inaaya is seen applying tilak to the deity. Next, she applies tilak to her mum. For the side note, Soha wrote, “Red for the passion and love with which we celebrate the power of the divine feminine on this second day of Navratri.”

Jesse Eisenberg And Claire Danes On Marriage | ‘Fleishman Is In Trouble’