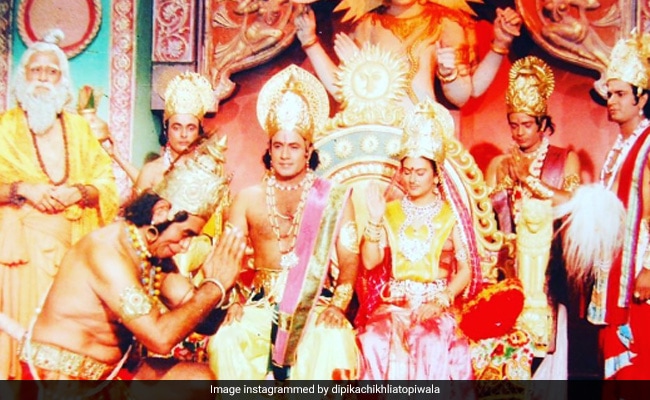 Filmmaker Om Raut’sAdipurush, a big budget adaptation of the Ramayana, feels far from its source material, says the team of Ramanand Sagar’s Ramayan that brought the epic to life in an era where Doordarshan was the staple. The latest version of the age-old story of good and evil finds has been facing boycott calls for its depiction of Hindu deities as well as the quality of its CGI following its teaser launch last week. And some of the cast and crew of what many believe is the “original” Ramayan seem unimpressed too.

To millions of Indians who tuned in every Sunday to watch the epic as drama being telecast into their homes, actor Arun Govil still serves as the face of Lord Ram, Dipika Chikhlia as Goddess Sita and Sunil Lahiri as Lord Lakshman. The late artistes Arvind Trivedi and Dara Singh played the roles of Ravana and Hanuman, respectively.

“I saw the teaser and it is very different from Ramayan that we had seen and I know India has grown up with it. It is very different and definitely technology is wonderful to have but I feel it does not reflect the era that actual Ramayana took place in,” Chikhlia told PTI.

The world of Adipurush, fronted by Baahubali star Prabhas who features in the title role as Lord Ram, is alien, she said. “When you make a subject (like this), you need to be truthful to the era, the period and the characters,” she said But Chikhlia is hopeful Adipurush might turn out to be wonderful.

“The director (Raut) is an award-winning director so I am sure it must be something wonderful,” Chikhlia added.

The portrayal of the 10-headed demon king called Lankesh, played by Bollywood star Saif Ali Khan, has come in for attack. With a beard, fierce eyes and a buzz cut, many have slammed the makers for the apparent Islamisation of Ravana.

The portrayal of Hanuman, with a beard, without a moustache and dressed in leather, has also attracted criticism. In an unusual portrayal of the Hindu god, Ram has been shown with a moustache.

“The kind of look that they have given to Ram and Ravana is not digestible to the audience because many people have seen the same characters in Ramanand Sagar’s ‘Ramayan’. People have seen Ram, Sita, Lakshman, Ravana and they should not spoil that image,” Lahiri told PTI.

“I don’t know why they did this look. We can’t say anything till we see the trailer or movie. I am personally not happy with the look, it is difficult to comment whether it is good or bad,” he added.

Moti Sagar, son of Ramanand Sagar, believes the sentiments of people must be always considered when a filmmaker adapts Ramayana for the screen.

“Everybody has a viewpoint. Whether it is right or wrong, I will not comment. There are a lot of sentiments attached to the epic and it should be taken into consideration while these characters are sketched and being shot,” he told PTI.

Moti Sagar said the key reason Ramayan still enjoys huge popularity is because his father was careful in his depiction of the characters.

“For the character of Hanuman, he visited so many temples, which are centuries old, much before the show was made. There are so many statues, paintings and we followed what was accepted by the masses.

“Everybody has a different vision and they have a right to have their vision, we have followed what is there in temples all over India,” he added.

The road ahead for the film looks bumpy with political parties and right wing groups also criticising the movie’s teaser.

Earlier this week, Madhya Pradesh Home Minister Narottam Mishra warned the makers of Adipurush of legal action if scenes showing Hindu religious figures in the “wrong” way were not removed.

The Vishwa Hindu Parishad also raised objections to the portrayal of Lord Ram and Ravana in the teaser, claiming it “ridiculed Hindu society”.

At the media preview of the film’s 3D trailer earlier this week, director Raut said he is “disheartened” by the reaction to the teaser but not surprised because the film is made for a larger medium.

“If given a choice, I would have never put it on YouTube but that’s the need of the hour. We need to put it there so that it reaches a wide audience,” Raut told reporters.