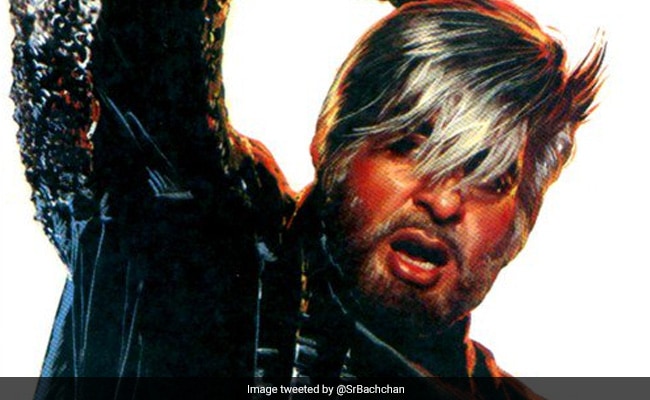 Amitabh Bachchan is a name synonymous with the Hindi film industry. The Shahenshah of Bollywood needs no introduction. Just a mention of his name thrills and excites his millions of fans across the globe. Many would agree that jahaan Amitabh Bachchan “khade ho jaate hain, line wahi se shuru hoti hain?” Yes, we have tweaked his iconic dialogue from the 1981 film Kaalia. After all, it is Amitabh Bachchan we are talking about. The veteran actor turns 80. From characters to dialogues, everything about him is a class apart. Be it the supreme dialogue from his 1998 film Shahenshah – Rishte mein toh hum tumhare baap lagte hain, naam haiShahenshah – or the hit line from the 1975 film Deewaar – Aaj mere paas banglaa hai, gaadi hai, bank balance hai, tumhare paas kya hai? – Big B has impressed us time and again with his exceptional dialogue delivery and intonation.

This film made Amitabh Bachchan the Shahenshah of Indian cinema. A corrupt police inspector by day and a vigilante at night, Big B carried the whole movie with ease.

T 2611 – 30 YEARS OF ‘SHAHENSHAH’ .. amazing times .. came at the time when there was little hope of its release .. because of attacks on my credibility .. but the people of the nation knew better .. had a bumper opening and success ! Thank you pic.twitter.com/wX4D1u5Rrk

All hail the OG Vijay Dinanath Chauhan. Watching the moment Amitabh Bachchan’s character introduces himself in a police station, we all get goosebumps. The actor gave a stellar performance in the Mukul Anand-directed film, which was remade in 2012 with the same title.

Little did the makers know at the time of making Deewaar that this dialogue by Vijay Verma (Big B) will become such a massive hit. The 90s kids have seen this line turning into a gold meme.

Big B as Arjun Singh, in this Prakash Mehra directorial, left us in splits. Especially this dialogue, which has since then served as fodder for memes.

What made Amitabh Bachchan’s 1978 film a huge success? His acting, the star cast, the story, and not to miss, the iconic dialogues. This one-liner was delivered by the megastar with such excellence that it made his character one of the most savage and confident criminals of Bollywood. The film was remade in 2011, with Shah Rukh Khan and Priyanka Chopra in the lead roles.

This Amitabh Bachchan and Rajesh Khanna film taught us many life lessons. The plot revolves around Anand Sehgal, played the Rajesh Khanna, who follows the mantra that “zindagi badi honi chahiye…lambi nahi.” He suffers from an incurable disease but that never stops him from living his life to the fullest. After his demise, his doctor Bhaskar Banerjee (Amitabh Bachchan) is left shattered but he remembers Anand’s glorious life and says, “Anand mara nahi, Anand marte nahi.”

We can never be as cool as Anthony Gonsalves. Remember when he stopped Robert (Jeevan) from running away with a box full of gold bars and delivered this dialogue? Hard to match Anthony’s style, right? The film also starred Rishi Kapoor and Vinod Khanna in the lead roles.

As  Amitabh Bachchan aka Vicky Kapoor said, a moustache should be rugged and dense, or in simple words, “Nathulal ji jaisi ho varna na ho.” The scene, from Prakash Mehra’s Sharaabi, where Vicky Kapoor admires Nathulal’s “moochein” in his office still leaves his fans in splits.

Amitabh Bachchan as Jai and Dharmendra as Veeru in Sholay still give us friendship goals.  This dialogue is as iconic as the Ramesh Sippy film. The scene opens with Basanti (Hema Malini) and Veeru (Dharmendra) sitting on her tonga and chatting. She then asks, “Tumne yeh nahi pucha ki humara naam kya hai?” Here comes Jai, who is resting behind Veeru, with his reply –“Tumhara Naam Kya Hai Basanti?”

We couldn’t find a better way to end the list. When Amitabh Bachchan’s Kaalia was sent to jail, he became the master of his own destiny. This dialogue shows his transformation from a naive guy to an angry young man seeking justice.