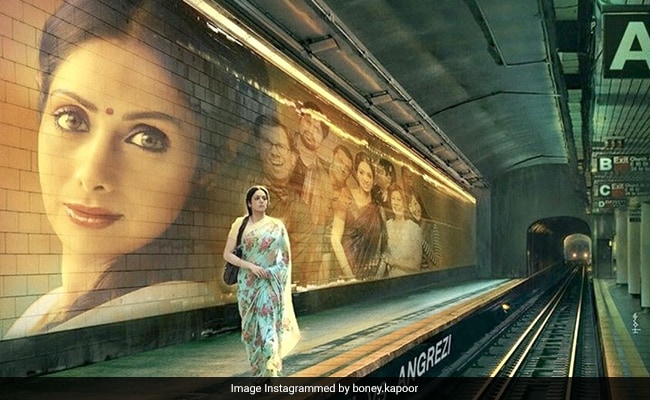 Late veteran actress Sridevi’s film English Vinglish has completed 10 years today (October  5). Boney Kapoor, the actress’ husband, has dropped a post on his Instagram handle celebrating ten years of the movie. In the post, he praised how Sridevi, after a hiatus of 15 years from films, touched everyone’s heart with “a timeless, magical performance” in the movie and added it is something “only Sri could do”. He wrote, “10 years of English Vinglish 🙂 To come back after a sabbatical of 15 years from films, with a timeless, magical performance that touched everyone’s hearts – is something only Sri could do. This film will always remain special,” followed by a heart emoticon. For those who don’t know, Sridevi made her comeback in the film industry after 15-long-years with Gauri Shinde’s film English Vinglish in 2012.

Soon after Boney Kapoor shared the post, a user wrote, “Forever special for countless reasons,” followed by heart and crying emoticons, while another wrote, “Best film ever noone could have done it like she did.”

In the movie, Sridevi played the role of a housewife who couldn’t speak English and was often ridiculed by her husband and daughter. However, she enrolled in an English-speaking course to stop her family from mocking her. The movie received immense praise from the audience and critics. The film marked her return to the big screen after a 15-year hiatus post Judaai, co-starring Anil Kapoor and Urmila Matondkar.

A few days ago, Boney Kapoor shared the pictures and remarked that he is wearing the suit he wore for the film’s premiere a decade later, in 2022. The first image is from designer Kunal Rawal’s wedding, while the second and third images are from 2012. Sharing the  post, he wrote, “Wearing the tux which I wore for English Vinglish premiere in Tokyo 10 years back, happy to see it still fits me.”

Veteran actress Sridevi died on February 24, 2018. She is survived by her husband Boney Kapoor and two daughters – Janhvi and Khushi Kapoor.