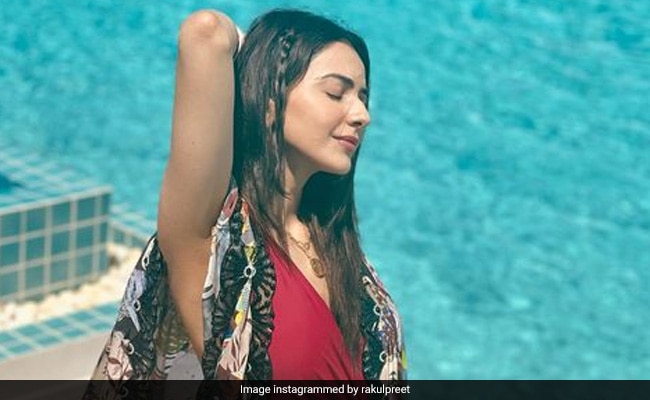 Rakul Preet Singh, who has had a super busy schedule this year, is currently on a holiday. After Diwali, the actress checked into Maldives this week. Rakul Preet Singh has actively been sharing pictures from her holiday in the island nation. On Friday, she posted a stunning picture, in which she can be seen dressed in a red swimsuit, which she wore with a printed cape. She captioned the post: “Relax and reflect,” adding a red heart emoji. Rakul Preet also posted a picture in orange swimwear from her vacation in the Maldives and she captioned: “Thank God for a holiday.” ( Thank God is also the name of Rakul Preet’s latest film).

This is what Rakul Preet Singh posted:

This is what the actress posted on Thursday:

Rakul Preet Singh was last seen in Thank God with Ajay Devgn and and Sidharth Malhotra. Earlier this month, she also starred in Doctor G, co-starring Ayushmann Khurrana. She also featured in Cuttputlli, co-starring Akshay Kumar earlier this year. Other than that she was also a part of Ajay Devgn’s Runway 34, in which she worked with Amitabh Bachchan and Ajay Devgn. She was also seen in Attack with John Abraham this year. She will next star in Chhatriwali, Meri Patni Ka Remake, among others.

Rakul Preet Singh, a former model, made her Bollywood debut with Divya Khosla Kumar’s Yaariyan in 2014. She has starred in films like Aiyaari, De De Pyaar De, Marjaavaan, to name a few.