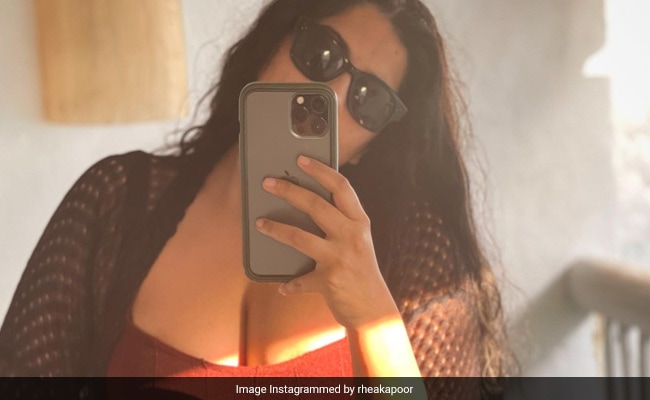 Rhea Kapoor, who is holidaying in the Maldives with her husband Karan Boolani, has shared new pictures on her Instagram handle. In the images, Rhea looks gorgeous in maroon swimwear paired with a shrug. She has left her hair open and completed her look with black shades. Sharing the post, Rhea wrote, “Maldivian (chilli emoticon) Taken on the husband’s phone in a good light emergency.” Soon after she shared the post, her husband Karan wrote, “Lucky guy,” followed by a fire emoticon. Her brother-in-law and Sonam Kapoor’s husband, Anand Ahuja, commented, “Rhe (bee emoticon)> Queen (bee emoticon)”.

Rhea Kapoor is holidaying with BFF Masaba Gupta and her rumoured boyfriend, Satyadeep Misra, in the Maldives. On Monday, she shared some breathtaking views and captioned it as “Backyard rainbow needs no filter. Unimaginable.” Check out the post below:

On Saturday, Rhea offered a glimpse of her “lazy lunch” in which she can be seen relishing crab shack. Also, she shared a gorgeous picture of herself relaxing in the pool. Sharing the post, she wrote, “Lazy Lunch. What’s a holiday without a crab shack? A Bad Beach. Ok, I won’t do that again.” Soon after she shared the post, her uncle Sanjay Kapoor wrote, “looks yummmmm,” followed by a love-struck emoticon.

In terms of work, apart from being a producer Rhea Kapoor is also a stylist and entrepreneur. She along with her sister Sonam Kapoor runs an apparel brand called Rheson. Last year, she also launched her ice cream brand. On the movie front, her next project features actress Kareena Kapoor.