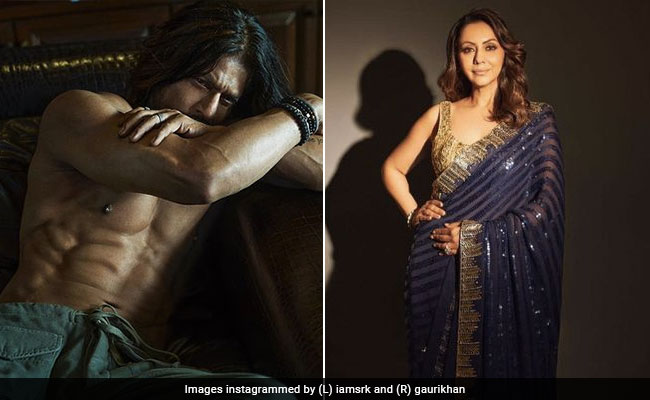 On Sunday, Shah Rukh Khan sent fans into overdrive when the superstar shared his shirtless picture on Instagram. In the image, the actor is sporting toned abs and long hair as he poses for the camera. However, what grabbed our attention were his caption and wife Gauri Khan’s comment on it. Along with the post, the actor dedicated a poem to his shirt from the song Yeh Kahaan Aa Gaye Hum from the movie Silsila. He wrote, “Me to My Shirt today: ‘Tum hoti toh kaisa hota….Tum iss baat pe hairaan hoti, Tum iss baat pe kitni hansti…….Tum hoti toh aisa hota..'” In the caption, he added, “Me also waiting for #Pathaan.” On seeing the post, Gauri Khan couldn’t help but drop an honest reaction in the comment section. She wrote, “Oh God! Now he’s talking to his shirts also…..!!!!”.

Shah Rukh Khan will be next seen in Siddharth Anand’s Pathaan, co-starring Deepika Padukone and John Abraham. Produced by Yash Raj Films, the movie is scheduled to release next year on January 25. It will release in three regional languages – Hindi Tamil and Telugu.

Shah Rukh Khan keeps his fans informed by dropping updates on Pathaan. In June, the superstar shared his look from the movie in which he can be seen holding a gun. In the caption, he wrote, “See you next year on 25th Jan, 2023. Celebrate #Pathaan with #YRF50 only at a big screen near you on 25th January, 2023. Releasing in Hindi, Tamil and Telugu.”

Meanwhile, Shah Rukh Khan also has Jawan and Dunki in his kitty.