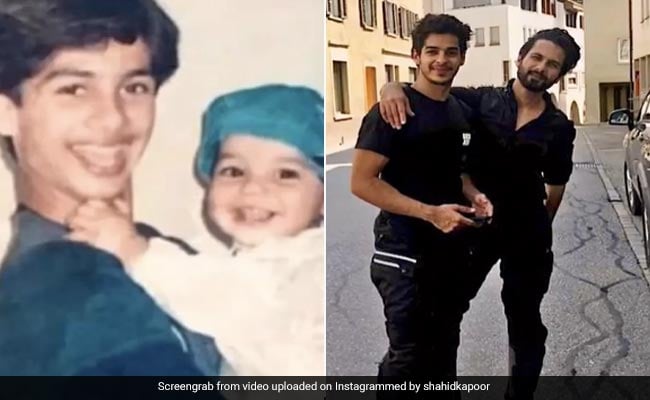 Ishaan Khatter is celebrating his 27th birthday today and Shahid Kapoor has the best birthday post for his younger brother. On Tuesday, Shahid Kapoor shared a video on his Instagram handle, which is a mix of many pictures and videos of the two brothers, right from the time when Ishaan was just a baby to the time when the brothers go on various road trips on their bikes. Sharing the adorable video, Shahid Kapoor wrote, “Happy Birthday Ishaan Khatter, only Jhappis and Pappis for you.”

Check out Shahid Kapoor’s birthday post for his baby brother:

Shahid and Ishaan share a strong bond and often share pictures of each other on their respective Instagram handles. The brothers are also often seen going on road trips together and sharing a stage and dancing.

Here are a few pictures of the brothers from their road trips on their bikes:

Check out a few videos of Ishaan Khatter and Shahid Kapoor dancing together on different occasions:

Both Shahid Kapoor and Ishaan Khatter are Bollywood actors. While Shahid Kapoor was recently seen in the film Jersey, also starring Mrunal Thakur, Ishaan Khatter on the other hand is waiting for the release of his film Phone Bhoot<,/i>. The horror-comedy, directed by Gurmmeet Singh, also stars Katrina Kaif and Siddhant Chaturvedi in the lead roles and is all set to hit the theaters on November 4.