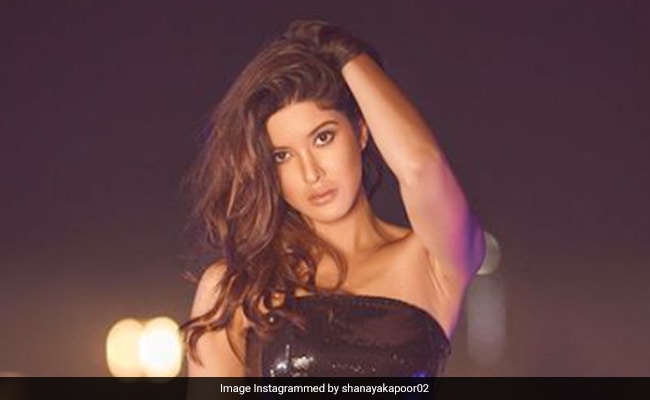 Shanaya Kapoor, who is currently in Dubai shared some amazing pictures of herself from a photo shoot and her BFF Suhana Khan couldn’t keep calm. Shanaya, who went to Dubai to celebrate her father Sanjay Kapoor’s birthday with her family, “spammed” her Instagram followers by sharing some sizzling hot pictures of herself from a photoshoot in a gorgeous black dress, while eating noodles at a restaurant in Dubai on Tuesday. Sharing a set of pictures, Shanaya wrote, “Spamming shoot photos while eating wagamama noodles.” In the pictures, Shanaya can be seen posing in a black dress in the backdrop of Burj Khalifa. As soon as Shanaya posted her pictures, her BFF Suhana didn’t waste a second to react to it. Suhana in two different comments cheered her best friend and wrote, “Wow” with many o’s in between and a star-eyed emoji. In another comment, she left some clapping hand emojis.

Meanwhile, Shanaya’s post also caught the attention of her cousin sister Khushi Kapoor, who in the post’s comment wrote, “Wooo” with star-eyed emojis.

Shanaya’s parents Sanjay and Maheep Kapoor too reacted to their daughter’s post and dropped Heart, fire, and star-eyed emojis.

Check out her pictures here:

Shanaya Kapoor and Suhana Khan – the daughter of Shahrukh Khan – are childhood friends, who are often seen cheering each other on their Instagram handles by leaving comments on each other’s posts.

The BFF-duo had recently visited Dubai together, where Suhana clicked many pictures of her best friend.

Check out a few pictures of Shanaya that was clicked by Suhana Khan:

Both Shanaya and Suhana are gearing up for their Bollywood debut films. While Suhana Khan will make her debut in Zoya Akhtar’s The Archies, also starring Khushi Kapoor, Shanaya Kapoor will be seen in Shashank Khaitan’s Bedhadak.