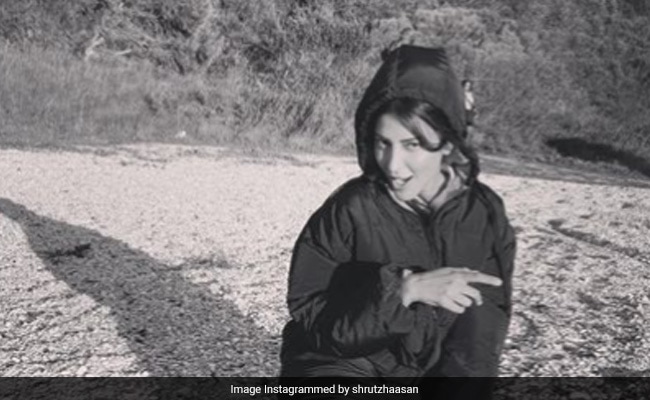 Shruti Haasan, on Tuesday, shared a set of goofy albeit adorable pictures of herself from her day out. Dressed in a puffer jacket, the actress can be seen goofily posing in the set of pictures from an undisclosed location. Shruti Haasan captioned the post: “Glam shots for Insta : folder 8 – felt weird might delete later.” In some of the pictures, Shruti Haasan can be seen posing in a forest of sorts. In another picture, she can be seen lying down on the ground. In short – the many moods of Shruti Haasan are highlighted in the post – all fabulous.

Shruti Haasan loves to keep her Instafam updated about different facets of her life. On Monday, she shared this video of herself performing and she wrote: “Bury Me – can’t explain the magic of three women playing on stage together , so thankful to have worked with these brilliant women – telling stories through song is my favourite thing to do and I count it as one of my greatest blessings .. talking to the grey skies from something deep inside of me.”

In terms of work, Shruti Haasan was last seen in Amazon Prime Video’s Best Seller. Her upcoming projects include NBK107, Waltair Veerayya. She will be seen sharing screen space with Baahubali star Prabhas in a film titled Salaar.

Shruti Haasan, daughter of veteran actors Kamal Haasan and Sarika, has starred in several Tamil as well as Bollywood films. She stepped into Bollywood with the 2009 film Luck, co-starring Imran Khan. The actress has also been a part of films such as Welcome Back, Ramaiya Vastavaiya, Dil Toh Bachcha Hai Ji and D-Day among others.

Watch: Neetu Kapoor On Whether Baby Looks Like Alia Or Ranbir