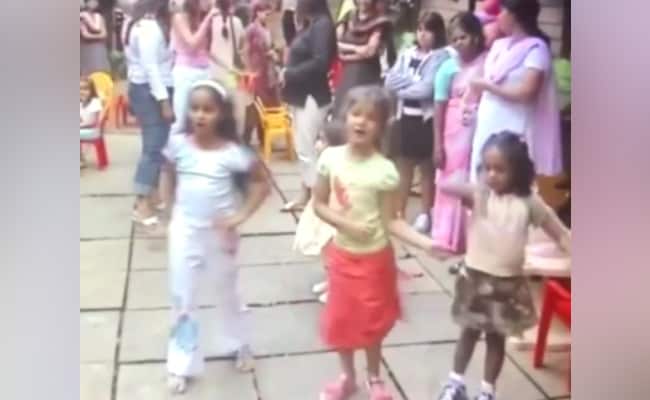 A still from the video. (courtesy: divashanayakapoor.fanpage)

Childhood buddies Ananya Panday and Shanaya Kapoor are the BFF goals, and this viral video stands as proof. In the video, we can see little Ananya and Shanaya grooving to a popular song It’s The Time To Disco, from the movie Kal Ho Naa Ho. Liger actress looks cute in an all-white outfit, while Shanaya can be seen in a yellow top and orange skirt. In the background, we can see their mothers, Bhavana Pandey and Maheep Kapoor, enjoying their performance. Check out the post below:

Ananya Panday, Shanaya Kapoor and Suhana Khan are childhood buddies and are often seen sharing adorable pictures and videos on their respective Instagram profiles. A few days ago, Shanaya shared pictures from her 23rd birthday celebrations with brother Jahaan Kapoor and BFFs Ananya and Navya Naveli Nanda. In the caption, she wrote, “Chapter 23”

Here have a look at more adorable pictures of Ananya, Shanaya and Suhana:

Meanwhile, on the work front, Ananya Panday made her acting debut in 2019 with Karan Johar’s Student Of The Year 2, co-starring Tara Sutaria and Tiger Shroff. Ever since, she featured in several films such as Gehraiyaan, Liger, Pati Patni Aur Woh and others. Next, she will be seen in Kho Gye Hum Kahan and Dream Girl 2.

Shanaya Kapoor, on the other hand, will make her acting debut with Karan Johar’s Bedhadak, co-starring Lakshya Lalwani and Gurfateh Pirzada. Helmed by Shashank Khaitan, the film will go on the floors early next year. She has also worked as an assistant director in cousin Janhvi Kapoor’s film Gunjan Saxena.