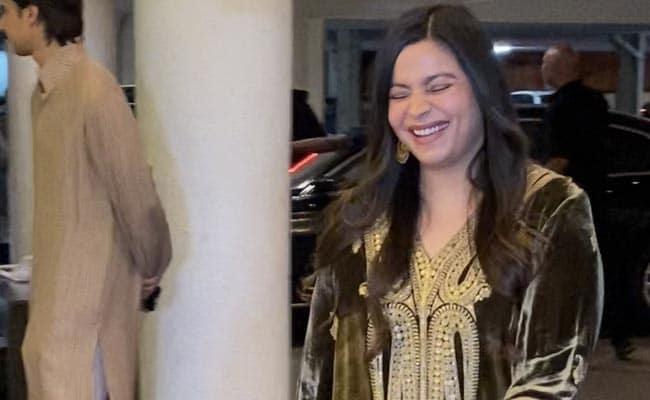 Shaheen Bhatt reacts after being called “maasi” by paparazzi.

Manish Malhotra’s Diwali party on Thursday night was a star-studded affair. Celebrities including Katrina Kaif, Abhishek Bachchan and others attended the grand event. Mom-to-be Alia Bhatt’s elder sister Shaheen Bhatt also attended the party as she posed for a few pictures for the paparazzi before stepping inside Manish Malhotra’s house.

A video going viral on the internet showed Shaheen Bhatt looking beautiful in an olive green dress with golden zari work. As she arrived at the Diwali bash, paparazzi were heard calling her “maasi ji (aunt)”- making a reference to her sister Alia’s pregnancy. This left a bright smile on her face.

“Damn cute,” wrote one. “Awwww maasi,” said another. A third commented, “Graceful,” while a fourth simply added, “love her”.

Meanwhile, Shaheen Bhatt recently reacted to many rumours regarding Alia Bhatt getting pregnant before marriage and more. Speaking to News18, she spoke about many things including her sister Alia Bhatt’s marriage, pregnancy and her work life.

Reacting to the negative commentaries, Shaheen said, “I will not speak for her because that is her own journey. Anything that she has dealt with internally is completely her journey. Having said that, you can never really please everybody. There is always going to be a negative comment or two out there.”

“And I think living in the public eye, we are all very practiced at knowing what to pay heed to and what not to focus on,” she added.

Shaheen and Alia are the daughters of filmmaker Mahesh Bhatt and actor Soni Razdan. Shaheen Bhatt is an author, screenplay writer and mental health advocate.