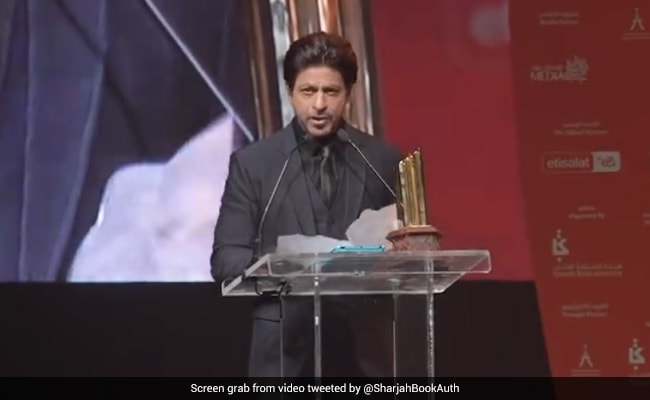 At the event, SRK sported an all-black ensemble and his trademark backcombed hairstyle.

Shah Rukh Khan on Friday was honoured with the Global Icon of Cinema and Cultural Narrative award as he attended the 41st edition of the Sharjah International Book Fair (SIBF) 2022 at Expo Centre in the United Arab Emirates (UAE).

Taking to Twitter, the official page of Sharjah Book Authority posted a video saying that the Bollywood star “inspired the audience” with his speech. “He spoke about the fact that the world, and events such as the SIBF, are the cornerstones on which bridges that connect the cultures of the world will be built,” the caption of the post read.

Watch the video below:

Bollywood star Shah Rukh Khan inspired the audience with his speech. He spoke about the fact that the word, and events such as the SIBF, are the cornerstones on which bridges that connect the cultures of the world will be built.⠀
⠀#SIBF22

In the video, Shah Rukh Khan said, “All of us, no matter where we live, what colour we are, what religion we follow or what songs we dance to… thrive in a culture of love, peace and compassion.”

The 57-year-old actor sported an all-black ensemble and his trademark backcombed hairstyle. According to Khaleej Times, he ended the evening by enthralling his audiences with some of his most famous dialogues from movies likes ‘Baazigar’, ‘Om Shanti Om’, ‘Don’ and ‘Jab Tak Hai Jaan’ as crowds cheered him on.

Also Read | Shah Rukh Khan And Deepika Padukone, “Words Can Do No Justice To Their Love” – His Post, Her Comment

A video posted by a fan account on Instagram showed Mr Khan recreating a popular dialogue from ‘Baazigar’.

Shared just hours ago, the video has already garnered more than 7,000 likes and nearly 50,000 views. In the comment section, while one user wrote, “He is worthy of all the awards,” another said, “Just King being King”.

“I watched the interview and he was so sweet. But he is right! We love him because he commits to everything that he does,” wrote one user. “Chills!!! His voice,” said another. “Not me watching this and smiling and blushing like an idiot,” commented a third. “MEGA MOVIE LEGEND,” added fourth.

Meanwhile, on the work front, SRK was last seen doing three cameos in Aamir Khan’s Laal Singh Chaddha, R Madhavan’s Rocketry: The Nambi Effect and Ranbir Kapoor’s Brahmastra. He will be seen next in Siddharth Anand’s Pathaan, which also stars Deepika Padukone and John Abraham as well. Apart from this, Shah Rukh Khan will also be seen in Atlee’s Jawan.