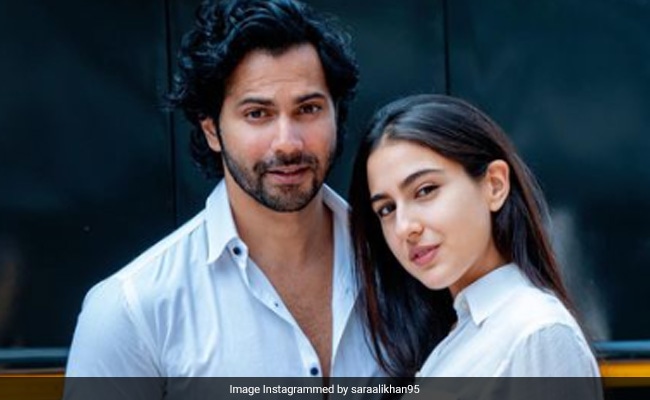 Sara Ali Khan is all set to play the lead role in Amazon Prime Video’s upcoming film Ae Watan Mere Watan. But, what caught our attention is the film’s announcement by Sara’s Coolie No 1 co-star Varun Dhawan. On Tuesday, Varun Dhawan, who recently collaborated with Amazon Prime Video as the face of “Prime Bae” (Prime Before Anyone Else), shared a video on Instagram. In the video, Varun Dhawan can be seen wearing a casual outfit and announcing the project in the Sara Ali Khan style.

He can be heard saying, “Guys, I have got some big news. A new movie on Amazon Prime Video, starring the lovely, the beautiful, the square root of Amrita Singh, Sara Ali Khan. Actually, nahi yaar yeh announcement na humko Sara ke style mein karna chahiye, (Actually no, we should make this announcement in Sara style), Namaste darshako, yeh hai announcement about Ae Watan Mere Watan, freedom fighter, powerful like Sun, Britishers ho gaye stun, she went on a run, khabar brought to you by Dhawan No 1.”

Sharing the video, Varun wrote, “As promised, there you go… I can in no way contain my excitement for this one, how about you? Ae Watan On Prime, coming soon…”

Sara Ali Khan shared the same video and revealed that she will be soon dropping her first look from the film. Her caption read, “Enough said Varun Dhawan. Dropping my look from the film soon, stay tuned darshako! Ae Watan On Prime, coming soon… only on Prime Video.”

Ae Watan Mere Watanis touted to be a thriller drama and is inspired by true events. The film, directed by Kannan Iyer, will be produced by Karan Johar and Apoorva Mehta.

Sharing a picture with Sara Ali Khan on Instagram, Karan Johar too made the announcement. He wrote, “Extremely excited to have Sara Ali Khan on board with us Dharmatic to tell a powerful true story! We are supremely proud to have Prime Video with us on yet another exciting venture… Ae Watan Mere Watan.” Mentioning Apoorva Mehta and their co-producer Somen Mishra, Karan Johar revealed that the film is directed by Kannan Iyer and written by Darab Farooqui and Kannan Iyer.

On the work front, Sara Ali Khan was last seen in Disney Plus Hotstar’s Atrangi Re, starring Dhanush and Akshay Kumar in the lead roles.

Sara Ali Khan often shares videos of her various trips on her Instagram handle, where she mostly begins it by greeting them and saying Namaste darshako.