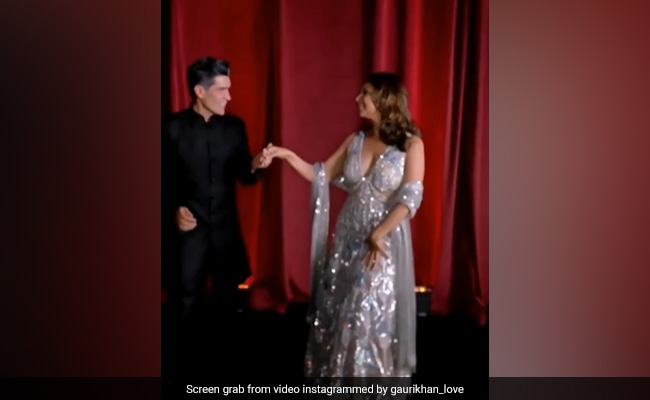 A still from the video. (courtesy: gaurikhan_love)

Remember the wedding in Monaco that Gauri Khan attended earlier this month? The one where Karan Johar, Shweta Bachchan Nanda, Karisma Kapoor, Rima Jain, Nitasha Nanda were also present? Well, a video from the festivities went viral on Monday. In the video that has been shared by several fan pages, Gauri Khan can be seen dancing with fashion designer Manish Malhotra, who was also the couturier for her outfit. The celebs were in Monaco for entrepreneurs Ayesha Grover and Nick’s wedding festivities, pictures from which trended big time on social media earlier.

Check out the video of Gauri Khan dancing here:

Meanwhile, designer Manish Malhotra shared a picture of Gauri Khan’s OOTD that she wore to the wedding, which was designed by him. Sharing the picture he wrote: “Gorgeous Gauri Khan epitomises style and glamour in our intricate silver embroidered ensemble.”

Gauri Khan is an interior decorator and she owns the plush Gauri Khan Designs in Mumbai. She has given makeovers to several suburban Mumbai restaurants and celebrity homes over the years. She has decorated homes for several Bollywood A-listers such as Alia Bhatt, Varun Dhawan and Karan Johar among others. She has designed restaurants like Arth and Sanchos. She also designed Alia Bhatt’s vanity van. Other than that, she is a film producer and made her debut as an author 2 years ago.